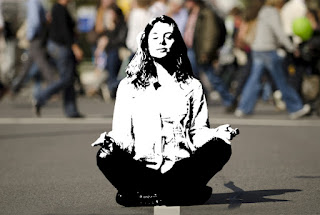 If you haven't said it, you may have heard it... "I'm spiritual but I'm not religious." It has become a cliche in our culture. A way of expressing distrust in organized religion without sounding like a heathen. At best, what it means is that the person feels no identification with any of the major religions such as Christianity or Judaism but their life and actions are still rooted and grounded in convictions of a spiritual nature. At worst, it just translates, "I'm not shallow, I just don't want my actions to be accountable to any of my convictions." It can operate as a huge cop-out for people who grew up religious but don't want to behave themselves anymore.

Now, I've had some discussions in the past about this, and I'm still not totally in tune with what most people seem to mean when they say "religious" but what I actually think it refers to is a set of practices or habits grounded in convictions or beliefs concerning the nature of reality. Therefore, as long as people do things with any frequency for any reason, they're religious. For most people, when they create a distinction between spirituality and religion, they're trying to create a distinction between conviction and action. To say, "I'm spiritual but not religious," can be a way of saying, "I believe things, I just don't act on them." This is a dichotomy that is unique to our context. You can't actually separate belief from action. They're interdependent.

Someone's spirituality is demonstrated in their practice... in their "religion." If you are actually spiritual, if you actually have beliefs, then your life will show it. And adversely, your practices and habits will reveal your true spirituality. If your regular life practice, for example, is to look out for #1, to get what you want and to manipulate your world accordingly, then you've simply got a self-centered spirituality. If you're habitually loving (and it takes discipline and "religion" to get to that point) then you're spirituality is likely much more healthy. But If you've got no life practice, if there's no discipline for formation or habitual pattern, then you can't say that you're spiritual at all.

So, the bottom line is, there's something terribly misleading about the phrase "I'm spiritual but I'm not religious." At best, it needs further clarification. At worst, it's an attempt to claim spiritual conviction without having to embody it or act upon it. Either way, I think it's usually a cop-out. Let your life tell us how spiritual you are...
Posted by wellis68 at 8/23/2012 01:23:00 PM