Explaining the Cross to an Atheist 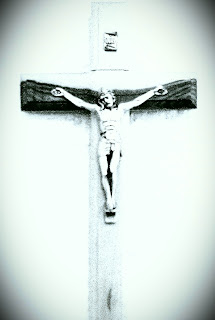 One of my favorite people, we'll leave him anonymous for now, happens to be an atheist. First of all, I think every Christian needs to have some good atheist friends, if only to keep them grounded in reality. Well this friend and I have been going back and forth, on an off, for some years now and recently he asked me about the cross... he wrote,

"...that's [Genesis] often identified as where we incurred our "debt" that was later paid by Jesus, and I think it's important to how many Christians view his sacrifice. Without a close reading of the events in Genesis, the story gets confusing. What did we do to need redemption? If it wasn't a discrete act of defiance, then were we just created this way? If so, God's a bastard (haha).

Anyway, lest I engage in railing against a strawman, maybe I should actually ask you what you believe about Jesus' sacrifice. Do you believe he "died for our sins?" If so, what does that mean? Did he die to allow us to be forgiven, or to offer us a path to salvation? Whatever his endgame, couldn't God have accomplished it without blood sacrifice, and wouldn't that have been preferable? That's the thrust of my argument, I guess: whatever God's end, human sacrifice is an abominable means thereto."

I realized that my theology of the cross is hardly systematic enough for me to fire off a quick explaination but, nevertheless, I offered a response:


"Genesis 3 is the traditional narrative location for what’s often referred to as “the fall.” It was at this point in the narrative that everything went south. The good creation that God had made began to spiral backwards, culminating in the deluge event where the waters that God had separated in creation were coming crashing down upon the earth threatening to return things to their chaotic state (the tohu vavohu), a process interrupted by God who promises not to allow the world to be un-created. The narrative function of this story is indeed to give theological framework for the injustice and chaos we see in the world and also (eventually) for understanding just what it is the world must be saved from through Jesus (the curse is the cross). The world is not inherently chaotic or evil (that’s what the Cannanite traditions, such as that of the Enuma Elish, contemporary to the Genesis narrative seem to suggest). Rather, the chaos and evil we see around us are remnants of a curse of sorts, something that does not belong, which Jesus came to reverse. That means that when I “sin” or when I perpetuate the patterns of injustice in the world, I have theological foundation to say, “that’s not really who I am.”


To refer to this curse as a “debt” implies a specific theory of the atonement known as the “ransom captive theory.” It suggests, in essence, that because of human sin, people are indebted to the wrath of God beyond their means to pay it back. God’s going to collect on this debt one way or another, either through sending you to hell or by killing Jesus on the cross. Thus, this coincides well with the “substituionary” theory of the atonement… that Jesus died on the cross in place of those who really deserved it, that he was a sacrifice to God in our place.

“Debt” and “sacrifice” might make useful metaphors at some stages of explaination, but I think these theories over-centralize them. ...and, overall I think they present a horribly barbaric and thoroughly unbiblical view of God.

I believe that the curses of sin and death are not just “spiritual realities” to be worked out in eternity. I believe that they’re social realities to be worked out in history. Injustice is real and there are really systems that exploit death in order to elevate their own capacity to control. Jesus died, quite historically, at the hands of such powers (religious and political ones) and through resurrection proclaimed “death does not have the last word!” Implying big things about the nature of control and systems of power.

I have a hard time laying it out systematically, but let me try…

The world was created “good”… you’ve got to start there. Something went terribly wrong and a curse of injustice and chaos came to bear upon reality, a curse which set off a pattern which should, by all means, have ended in death. The God who created the world interrupted the patterns and entered climatically and authentically into history in Jesus. He lived so contrary to the powers that be, the powers which perpetuated those patterns (spiritual and temporal ones), that they killed him just like they did everyone else who did not align with their authority. As such, Jesus' death was not a sacrifice TO God, it was a sacrifice OF God. Mysteriously in Jesus, God was dying the death of a political revolutionary, the death of a criminal, the death of one utterly subject to the powers of sin and death—he died our death—and joined us in the darkest and most shameful place in human experience. But as we should have expected through an awareness of the narrative of which Jesus is a part, God breaks through the patterns of the curse and defeats death in resurrection, proclaiming simultaneously that crucified people are not cursed and that history does not end in death and darkness. Yes, Jesus died for our sins, for the ones of which we are victim and the ones of which we are perpetrators, to say once and for all that we are not cursed, that our sin is not essential to us, and that there is no place in us that is too dark for redemption. Yes, we are forgiven, forgiven and now empowered to live out our forgiveness. God, died in failure, met us in our failure, and therein set off a new pattern, a counter-intuitive pattern, one than ends not in death but in resurrection. God's presence in death is the beginning of that pattern and thus resurrection is unintelligible in isolation from crucifixion.

Could God have accomplished this in any other way? Not really... The cross was not the means to an end… the cross was the end in itself. There’s no happy way of authentically entering in to the darkest and most shameful place in human history and experience in order to say, “me too” and “it is finished.” The cross is reality. Jesus’ presence there is God’s presence there, God’s presence in reality, and as such it is redemption. When the God of liberation enters reality, when God hangs on a cross, crucifixion MEANS resurrection. God had to assume it in order to redeem it.

It doesn't stop there... the cross is not just some cosmic thing. We're invited into the same pattern. The pattern of entering reality and claiming Christ's victory there. It's not exactly "substitutionary" because Jesus said, "as I've been sent, I'm sending you." The follower of Jesus is invited to bring restoration through giving live (especially rather than taking it), we are invited to engage in the suffering of others, much like Mother Theresa and exactly like Jesus, in order to say, "me too... you're not cursed." And we trust that by engaging in this pattern, our end is not death but resurrection.

I'm sure that there's something terribly wrong with my explanation and that I've got a few Christian friends who are willing to point it out, but I think that such a narrative approach to the question of the cross is much better and more healthy than some of the systematic ones I've heard in the past. What do you think?
Posted by wellis68 at 8/23/2012 01:26:00 PM