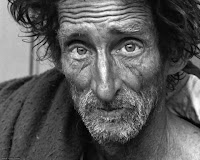 You wanna find Jesus? Don't look in the churches. Don't look on the internet or in the library. You wanna know where Jesus is? He's not hanging out in the home with a white picket fence, he looks at the suburbs from a distance. He's not in the white house--wouldn't even get past the gates. Don't look in the banks, don't look in the office buildings, don't look in the universities or the seminaries. He's not wearing a uniform and he's not sporting a flag on his lapel. You want to know where to find Jesus? He's living on the streets, he's eating in the rescue missions, he's sleeping under the overpass. He's struggling for enough money to pay his next bill, he's working hard and getting nowhere. Jesus is the one you're afraid to talk to, hesitant to offer offer a dollar. Jesus is the one you assume is an addict, lazy, illegal.

You eat something that upset your digestion??? That was spicey!

Haha. No. I just finished reading the second chapter of The Rich and The Rest of Us by Cornel West and Travis Smiley... that'll upset something, for sure.

I will have to look into that one. Never heard of it...

Thanks for the tip.