"Obamacare," Military Spending, and the Poor

We get taxed to do all sorts of things. Our beef in this country isn't really with taxes, though some would say so. Everyone is willing to be taxed for something. It just depends on what your priorities are.

I don't think it's news that I am an advocate for non-violence. In fact, donning the right definition, I'm willing to embrace the label of "pacifist." I believe that Jesus was serious when he said, "love your enemies" and "whoever lives by the sword will dies by the sword." So you can imagine what I think about paying taxes. The 2012 United States military spending budget, which stands at about $700 Billion is about 7 times larger than the $106 billion of the military budget of China. It's bigger than the next twenty largest military spending countries combined. The United States and its closest friends are responsible for almost three-quarters of the whole world's military spending. Every time I pay taxes, I am complicit in the global coercive violence of the U.S. military machine. I actually contribute to violence whenever I receive a paycheck. I don't exactly have a choice in the matter, I was born into this system (so I believe that mankind can be considered to be "born into sin"). Sure, since it's a democracy, I do get to vote and I do get to express myself in the political sphere. But if my vote loses to the majority, I still have to live with it and, guess what, there'll be a whole lot of other people who are happy about it. 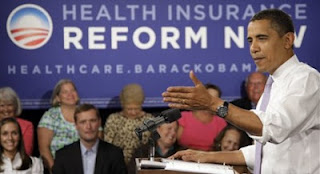 This morning the Supreme Court made its ruling on the constitutionality of the Affordable Care Act, also know as "Obamacare." If they had determined that the act was indeed unconstitutional then it would follow that the only progressive reform to health care ever to be placed into law would be nixed and we would be going back to an even more broken system. But the supreme court ruling was that "Obamacare" is indeed constitutional and will be upheld as the law of the land. The website Healthcare.gov provides a pretty accessible explanation of the law, but to sum it up, the act is just one step toward justice for disenfranchised people without health insurance. The law will give more people health insurance and it will make health care more affordable. It's based on the vision, according to the President,  that "no one should go broke because they are sick." It's good news for people for whom seeing a doctor seems to be an out-of-reach option and for people with preexisting conditions. Although it's not perfect, although there are still some hanging questions and there's still a long way to go for implementation, this act sets the table for further progress and the prospect of even more help for the poor in America.

The reactions to this Supreme Court decision have been polarized. It seems that people are either ecstatic or they're angry, with few in between. Some people who currently have insurance have complained that this law will tamper with their plan, that it will make things more expensive. Some have complained that they don't want to be taxed in order to pay for others to go to the doctor. And while many of their complaints are, I believe, based on limited understanding and false presuppositions, I can't help but fret over their reaction. For all the things our taxes go toward, for all the things we pay for every year, is our neighbor's health not a worthy investment? This is definitely a moral question because, for those with the money, there's not necessarily any directly personal political or economic benefits. If capital is our only political measurement, then it's true, there's not much for the wealthy in all of this. But if we can see the blessing of our neighbors, specifically our poor brothers and sister, as our true reward then this ruling is a victory, an historic moral victory.

Wealthy conservatives seem unfazed when they see trillions of our tax dollars going toward the funding of violent "defense" and coercive military force, but if a penny goes toward health and healing, they're gonna get "tea'd" and make a fuss.  If I've got to get taxed to fund the coercive violence of the American military agenda, it seems fair enough that dissenters of the Affordable Healthcare Act should get taxed so that their neighbor can see a doctor without going broke.

I usually try not to get too "partisan" on this blog, but I can't help but notice the irony here. Even if "Obamacare" is not the best we can do, and I'm sure that it's not, there is so much reluctance from its opposition. None of its opponents seem to want to make the poor their priority. The opposite seems to be true. And yet the irony is that the party that has positioned itself as such happens to be the party that has traditionally been more "religious," the party of evangelical Christianity. Jesus' life and values were clearly and unmistakably oriented toward the needs of the poor and the disenfranchised. If Jesus' example is to provide us with any social moral insight, then we too would do well to orient ourselves and our politics in the direction of the poor. Christians, especially the ones who take the bible literally, should be the first in line to any cause that is about meeting the needs of "the least of these." If "Obamacare" misses the mark, then it should be argued in these terms--it should be argued from the position of advocacy for the people who've been victims of a broken system for far too long.

The moral question that faces the church, and indeed the world, is this: toward whom will we orient ourselves--toward the poor who can offer us nothing in return or toward the powerful who promise prosperity if only we emulate them? The incarnation teaches us that our salvation does not come from the powerful, rather, our salvation is caught up in the destiny of the poorest of the poor, even the crucified. Jesus said, "the first are last and the last are first." Our salvation is bound to those with whom Christ shares identity. If we are to orient our lives in the direction of God's kingdom, then we must be oriented toward justice, toward mercy, toward compassion. We must be oriented in the direction of the least, the last, and the lost--in the direction of the crucified Christ.
Posted by wellis68 at 6/28/2012 05:51:00 PM