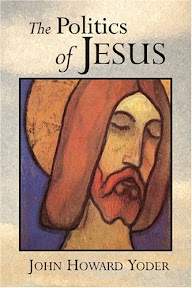 Friends of mine may be shocked to hear this, but I have not yet read The Politics of Jesus by John Howard Yoder... until now. I've just started reading it. I'm about 60 pages through and already I know why it's so highly recommended to me all the time. Yoder's suggestions aren't new to me (so far) but it is always so refreshing to read someone putting your sentiments into eloquently reasoned arguments.

I read something this morning that especially resonated with me. In light of the recent Supreme Court ruling regarding the constitutionality of the Affordable Care Act, I've heard a lot of angry evangelicals desperately trying to isolate Jesus from his own politics. One conservative, upon reading something I wrote on Facebook about Jesus' political orientation toward the poor, asked me, "Wes.. what verse(s) make you think that Jesus grouped individual actions with political actions?" I can vaguely remember when I was able to think of "individual actions" and "political actions" in isolation. But now, the question hardly even makes sense to me. Individual actions are political actions. When an individual does something with any more substance than trimming their nails, there are always political implications.

The fact is, upon any responsible reflection on the New Testament, there are enormous political implications to the life and ministry of Jesus, not to mention his death and resurrection. They're clear throughout the New Testament and so if he was political then, he's political now. To ignore the politics of Jesus is to ignore the doctrine of the incarnation and all it's eschatological relevance. In other words, if we are going to say that Jesus was not about entering into and affecting an actual human context--full of political, social, and ethical realities--if we are to limit Jesus' relevance to some space outside the political and social realm, then we're simultaneously limiting, even negating, the doctrine of incarnation. And we are also denying any relevance that the incarnation may have in present or future contexts. Indeed, if Jesus wasn't political, if his relevance was purely "spiritual" or personal then it should be said that he was, in fact,irrelevant.

Yoder argues well the political relevance of Jesus. Here is what I read in his book today that resonated with me in light the conversations I've been having since yesterday...


"Jesus was not just a moralist whose teachings had some political implications; he was not primarily a teacher of spirituality whose public ministry unfortunately was seen in a political light; he was not just a sacrificial lamb preparing for his immolation, or a God-Man whose divine status calls us to disregard his humanity. Jesus was, in his divinely mandated (i.e., promised, anointed, messianic) prophethood, and kingship, the bearer of a new possibility of human, social, and therefore political relationships. His baptism is the inauguration and his cross is the culmination of that new regime in which his disciples are called to share. Hearers or readers may choose to consider that kingdom as not real, or not relevant, or not possible, or not inviting; but no longer can we come to this choice in the name of systematic theology or honest hermeneutics. At this one point there is no difference between the Jesus of Historie and the Christ of Geschichte, or between Christ as God and Jesus as Man, or between the religion of Jesus and the religion about Jesus (or between the Jesus of the canon and the Jesus of history). No such slicing can avoid his call to an ethic marked by the cross, a cross identified as the punishment of a man who threatens society by creating a new kind of community leading a radically new kind of life." (page 52-53)

Now, of course, this quote leaves us to consider what exactly such a political ethic should entail (and I know where Yoder is going to take it), but nevertheless, it requires that we examine not only the "spiritual" Jesus but the incarnate Jesus who actually affected his context and effected a new way of being human here, now, in the present and historic world. Though we pastors are afraid to, in this polarized world, Jesus wasn't afraid t get political.
Posted by wellis68 at 6/29/2012 08:51:00 PM