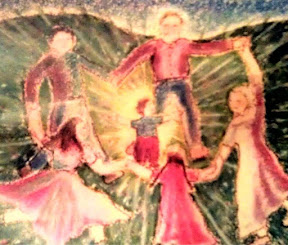 Some people just have a grace about them. You know the kind of people I'm talking about? They just have a way of making you feel accepted, like they can handle you, like they aren't judging you. And yet, ironically, simply because of their grace and their kindness, they're also challenging. They have a way of surfacing, simply by contrast, all the things in you that aren't so gracious and kind. They sharpen you and inspire you to be better, to be gracious as well. They have a certain power, a power they gain not because they take it but because they accept it, a power they don't exploit but hold rather loosely as though it doesn't really belong to them in the first place. They don't need to go around imposing their way upon others because their way speaks for itself. For me, people like Desmond Tutu (though I've never met him) and Tony Campolo (who gave me a hug before I could shake his hand when I first met him) come to mind, though the best examples are people who aren't so well known.

Then there are other people. There are people who have the opposite affect. These people are easier to come by, unfortunately. They're people who make you feel judged right out the gate. Their utter lack of grace makes it immediately apparent to you that they have a certain standard for who you should be, how you should think, and what you should be like. Sometimes they even justify their judgement as though it somehow makes them prophetic, like they're "telling it like it is" while everyone else is just being ignorant. They claim a moral, intellectual, and often a religious high-ground and authority. They sometimes (too often) even manage to gain a following, other people who are perhaps intimidated into following their lead, people who are willing to submit to their exploitation of power. But rather than inspiring people to be better simply by their example, they scare people away or, worse yet, they mold others into their image, inspiring people to hide their insecurities by judging and projecting their brokenness upon others. When these sorts of people happen to be Christians it makes for a bad combination. There's no wonder that so many are so turned off by the church, so disillusioned at the concept of God. I would be too if I'd only been exposed to such as these. I won't name names here, I'm sure you can think of a couple of figures which fit this description.

There are people who are fierce with grace and kindness--fierce with love--and there are people who are just fierce with power and judgement. I don't know that we can really justify a "balance" here. I think the ideal has got to be one or the other. The former is just as capable of speaking their mind as the latter. The former is just as capable of discerning injustice and speaking prophetically as the latter. So the question is, first of all, which sort of person is God like? What's the nature of God's power? And secondly, which sort of people should we be training ourselves to be? Which direction are our spiritual disciplines taking us? I believe that Jesus was fierce with grace, fierce with kindness, fierce wit love, even to the point that his life became a challenge to the power players, a prophetic indictment of their exploitive practices. And as followers of Jesus, we should be fierce in the same way.
Posted by wellis68 at 5/17/2012 01:46:00 PM