Tripp Fuller (@Trippfuller) posted an article on Twitter today reporting that The Cardinal for Berlin  joined "a growing chorus of prominent leaders in the Roman Catholic Church calling for a re-examination of church teaching on same-sex relationships." 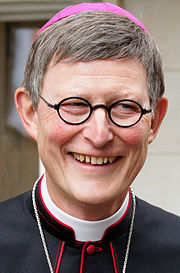 Berlin’s Cardinal Rainer Maria Woelki, at a conference on 60,000 Catholics in Mannheim, spoke out in support of the moral legitimacy of same-sex relationships. According to the Tagesspiegel newspaper, Woelki said,


"When two homosexuals take responsibility for one another, if they deal with each other in a faithful and long-term way, then you have to see it in the same way as heterosexual relationships."

Regardless of where you stand, I think that this may be a sign of where this debate (the debate concerning the Biblical and moral position of the church on homosexuality) could be headed. Notice that Woelki does not try to presume homosexuality as one thing, one uniform concept, but distinguishes a sort of ethical homosexuality from the otherwise implicitly unethical version thereof. I think that may be the best direction for the conversation--to impose the same ethical standards onto homosexual relationships as we would heterosexual ones without imposing arbitrary moral standards.

I don't think it will suffice much longer to simply argue that homosexuality, as a whole, is wrong. You've got to say why it's wrong and you've got to say it in practical and real-life contextual terms, not merely in interpretative ideals and ethereal concepts. For example, you can't just say it's wrong because of some ideological "design" for humanity or procreation. Those arguments ignore real stories way too much. The fact is, relationships are about more than procreation and the concept of a "design" for humanity is just not practical (does the man who cannot produce sperm fit the "design"? If not, then why are we letting him have sex?) and it's arbitrary unless, once again, you argue why.

God is not arbitrary. God's design for humanity is an ethical design with real social implications. God has a reason for why things are wrong. Murder is wrong because it disregards the value of human life. Rape is wrong because it's purely dehumanizing and abusive. Theft is wrong because it violates the the rights of ownership and it values possessions more highly than human dignity. Promiscuity is wrong because it violates the relationship between intimacy and commitment. But why is homosexuality, as a whole, wrong? You've got to answer that question without using "design" or procreation or "'cause the Bible says" (because, again, God is not arbitrary, therefore even the Bible has its reasons, not to mention the Bible is not clear on the subject). You've got to say why it's unhealthy and argue from there. Eventually, you've got to deal with the homosexual relationship in which bother parties are faithful, committed, monogamous, healthy, and even Christian.

So positioning the argument within the realm of ethics, actually discussing the nature of relationships and measuring their morality in terms of practical and contextual standards of social health, like Cardinal Rainer Maria Woelki did, seems like a very good idea. It will keep the extreme examples of promiscuity and irresponsibility within the gay community out of the conversation concerning homosexuality's intrinsic moral quality.
Posted by wellis68 at 5/23/2012 01:57:00 PM

German liberal...Wes, the theological heritage of that part of Europe is decisively liberal...in fact, it was the German Cardinals that supported socialism, the Nazi's etc...that makes it easy in their understanding of the Christian tradition to contextually state what they are stating...not the mainstream of Catholicism...just sayin! love ya

I don't see how supporting the Nazi's in the 30's and 40's would make them MORE accepting of gay people than anyone else... Weren't the Nazi's pretty intolerant (quite the opposite)? If it is their liberalism which has positioned them to have this conversation in the way that they are having it, then we've got something to learn from liberalism.

I'm simply talking about the texture of the conversation. You can have your position, but hold the dialogue in a way that is contextually and Biblically responsible. We've failed at this in the United States... on both sides of the aisle.

Yeah I buy your point...our discussion and conversation has never been couched in love and understanding..."taking a stand" either way on a issue does not disqualify us from listening and speaking "our" perception of the truth in love.

Notice that he never endorsed homosexual sex acts, nor did he mention marriage, and in fact a year ago he explicitly stated that homsosexuality is contrary to the order of creation. But it is good that he is calling attention to the good that there is in many of these long-term, committed relationships. For the context of his remarks, I suggest reading this post: http://danielsilliman.blogspot.de/2012/05/german-catholic-cardinal-calls-for.html

I, too, am glad for this discussion. I do have some questions, however.

I would like to start with your discussion of "God's design for humanity," which excludes rape, murder, theft, promiscuity, etc. I do not disagree that these things are problematic if not horrendous, but I do wonder what, if not your own opinion, qualifies them as things not part of "God's design"? It can't be the ten commandements, as their historical context precludes them from an interpretation about theft as an assault on "rights of ownership," a concept predominant from the 17th century. Anyway, as the rest of your argument presumes some sort of coherent "design for humanity," I'll move on.

At the end of your blog you discuss measuring the morality of relationships, but I wonder why the 'morality" of relationships need to be "measured" at all, and who is qualified to do such measuring? Who can judge? Is morality just one thing, or has it changed over time? You affirm monogamous couples as "ethical," but what about those polygamous families from days past, such as Jacob, Joseph, and David? Were they not, too, following God? Perhaps it is more helpful to think of marriage and relationships in general as social constructs that have evolved over time in step with larger social changes.

Lastly, I am a bit confused about your call "to impose the same ethical standards onto homosexual relationships as we would heterosexual ones without imposing arbitrary moral standards." Who is in charge of "imposing" these "ethical standards"? And how are these "ethical standards" exempt from definition as "arbitrary moral standards"? As someone who knowingly thinks differently from you, I can't help but think that your standards are yours, and mine are mine. They are not arbitrary, but very meaningful, stemming from different ways we conceive of and have experienced the world. I don't understand how these (presumed) "ethical standards" can be differentiated from "interpretative ideals and ethereal concepts." If our "standards" don't emanate from us for very real reasons and become something outside of ourselves that can supposedly be "imposed" on others, they inevitably become "ethereal concepts"--abstract and disembodied.

I think instead we are to be as you said elsewhere:

Don't be afraid to let your interactions with people influence the way you see the world, your faith, and even your politics. Humanity is an embodied reality, an existence graciously bound to communal interdependence and social responsibility. The incarnational nature of God in Christ and, by extension, of God's word in scripture, beacons us to encounter God through authentically human embodiment, listening and reading not from some notion of objective idealism but from the position at which our feet are actually touching the ground.

Hey Sarah,
You bring up more than I'm prepared to tackle through this medium but I will say that I think you're assuming something I am not. I am not trying to suggest any level of objectivity and I am not suggesting anyone judge anyone else. But for the sake of ethical dialogue, we do need a vision for what a redeemed/healed/reconciled world might look like. We "measure" morality as a community for sake of teaching and admonishing one another (as Paul suggests we do in various passages including Colossians 3). If my standards are mine and yours are yours, then that's fine. I wouldn't suggest that I am more authoritative than you or vice versa. But that doesn't mean we should talk about it whenever it's practical to do so. I simply think that the same sexual ethics we impose or uphold in heterosexual contexts should be applied to the conversation concerning the legitimacy of homosexual relationships.