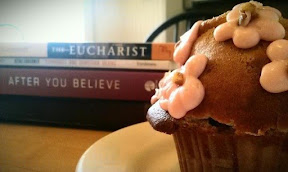 This Thursday morning of Holy Week, Maundy Thursday (which comes from the Latin word for "commandment" in reference to Christ's "new command" to love), became simply an excuse for me to re-read some of my favorite sources for reflection on Eucharist (or Communion) over some coffee and a very pretty muffin at the Kountry Kitchen, a local favorite of mine. Part of me is tempted to just list quotes from those sources, including William Cavanaugh, Andrea Bieler, and Luise Schottroff. But I'll resist that temptation and offer some thoughts of my own (but as you'll discover, I will also succumb to that temptation).


While they were eating, Jesus took bread, blessed it, broke it, and gave it to them, and said, "Take; this is my body." He took a cup, gave thanks, and gave it to them, and they all drank from it. He said to them, "This is my blood of the covenant, which is poured out for many. I assure you that I won’t drink wine again until that day when I drink it in a new way in God’s kingdom." After singing songs of praise, they went out to the Mount of Olives. (Mark 14:22-26 CEB)

On what ended up being Jesus' final "normal" evening with his friends, he does what anybody would do. He shares a meal with them. This particular meal happens to be a Passover meal, uniquely and particularly connected to the concept of God's liberating and saving work. But it's also important to remember that it's essentially a meal among friends. Jesus was a fan of meals. For Jesus and for the people around him, meals were a special sign of community, of connection and solidarity. And how else does Jesus begin that meal than by taking a rag and a bowl and washing the dirty feet of his rugged and road weary disciples. Still intoxicated by hierarchical sensibilities, the disciples express some discomfort in allowing their teacher to wash their feet. But nevertheless, Jesus continues the servant's task (and we could get into all the political implications of such an action, but we won't) as somewhat of a foreshadowing for the way in which he's going to serve the meal. Then he invites his disciples to follow his example.

Jesus takes bread, a very normal thing, and takes ownership of it, "this is my body." And he shares it with his disciples. Then he takes wine, again a very ordinary thing, and says "this is my blood." and he invites his friends to drink it. Now this is a symbol in the sense that the disciples were not cannibals but it's also more than a symbol. This is something of a mini-Lent.

The Lent season has been, in essence, a season to lament (in a distinctly biblical and human sense) and to fold our stories into the story of Jesus, to bring our suffering into the story of Jesus' suffering and to allow it to be redeemed therein. Jesus is foreshadowing his death and, strange enough, he's offering it to his disciples for their consumption. He says, "do this in remembrance of me." He is inviting them to consume and to reenact the drama of the cross in their own lives. Remembrance has all the weight of re-membering, of bringing-back-together, in this context. As Bieler and Schottroff put it,


"remembering encompasses re-cognition of things that happened in the past; it is a re-constructive process in which individuals deduce events that have occurred in the past in order to interpret both their present and their future." (Eucharist, page 173)


This sort of remembering, the kind into which Jesus is inviting even us, is a lens through which we interpret our experience and envision our future. We are invited to immerse ourselves in Jesus' story. And, in the genius of Jesus, done in a meal, we cannot isolate ourselves in this sort of remembrance. It is a communal act. As in a meal, we are brought together in this. Again, Bieler and Schottroff:


"By immersing ourselves in the Christ narrative in the Eucharist, we become one in Christ. This is an eschatological statement. This faith in the unity of the body of Christ is transformed into radical eschatological imagination when we share the meal together without suppressing the painful experiences and memories of exclusion and privilege. We bring our bodies to the table, and with them our suppressed and distorted memories. We dare to come and encounter the living God because we live from the promise that the holes, the stammering, and the disruptions in our narratives, everything that is forgotten and cannot be remembered, is also held by God's grace and is not lost. God will remember." (Eucharist, page 174-175)


In this meal, our past becomes folded in Christ's past, our presence becomes Christ's present, and through eschatological imagination our future is caught up in Christ's future. As we take Christ's body into ours, our bodies are taken up into his. As Cavanaugh writes, "to consume is to be consumed, to be taken up into participation in something larger than the self, yet in a way in which the identity of the self is paradoxically secured" (Being Consumed, page 84).

So as the Lent season has moved, so the Communion meal moves--from broken past to glorious hope. And, as Lent draws us to consider the purpose of our fasting (see Isaiah 58), we are drawn into Christ's story through which the whole world is redeemed. This is the connection between Jesus' act of washing the disciples' feet and the meal itself. As our story is woven into Jesus' story, as we are consumed by the body and blood of Jesus, we are invited to reconstruct in our own lives the mission and purpose of Jesus.

One more quote... N.T. Wright says it like this,


"This meal is therefore simultaneously part of our journey through bereavement, acting out the dying of Jesus within which our own sorrows can be held and dealt with, and also part of our mission, because it is the powerful declaration that on the cross of Jesus Christ the living God has dealt with all that distorts and defaces human life. And this meal therefore propels us out, to go into the community in the confidence that God is at work, that Jesus is Lord, that the Spirit can and does heal and renew." (Christians At The Cross page 45-46)


Wright continues his thought, "...what would it look like for them [the suffering people in our backyard] to be set free from that slavery? And how can our celebration of Jesus' strange new Passover equip us to be part of that answer?" (page 47)

The Communion meal, the meal in which thousands if not millions of Christians will take part this very night, is an authentic recognition of suffering and depravity in our current contexts and situations. And simultaneously, it compels a future hope, an eschatological vision of healing and restoration, to invade those contexts. It is a meal of lament and of hope, recognizing the incarnational solidarity of God with a broken and crucified world. By eating real bread and drinking real (if not extremely sweet ((i.e grape juice))) wine, we are affirming the reality of those experiences and hopes as a corporeal and genuine historical reality, even a political reality. As I heard N.T. Wright once suggest, we are wandering in the wilderness and, as the Israelites before us, we are tasting in the present the fruit of the promised land. And if we take this meal in, in remembrance of Christ's death, we cannot help but live out resurrection hop in the life of the world.
Posted by wellis68 at 4/05/2012 01:10:00 PM