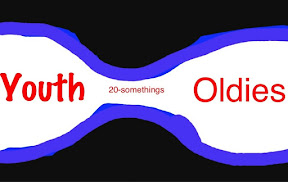 Youth ministry does need serious critiquing and so I welcome the dissenting voices but what's the real issue here? Most of this criticism comes on the waves of the staggering statistics which show that people in their 20's and early 30's aren't going to church. So the blame is being placed on youth ministry, we are wondering what youth ministry is doing wrong as to lose so many people once they graduate high school. Well my friend Josh, a local youth pastor, pointed out the logical fallacy of this

perception. Teenagers are coming to church, that's not the problem. Old people are coming to church, that's not the problem either. So the problem is in the gap. Teenagers are going to church because we're "doing something about adolescence," we are incarnationally investing in the lives of students. So why would we place the blame on the people who are making that investment? Why aren't we pointing the eye of discernment toward the church at large which is letting these people slip through the cracks after they graduate from the youth ministry? The fact is, because of the extended adolescence of our culture, 20-somethings are adolescents and churches have not figured out what to do with adolescents once they're out of high school. It's the whole church that's broken in this area, not just youth ministries. Of course youth ministries have responsibility in this but why would we consider taking away youth ministry as we know it when it's not the entity that's losing their people's attention?

But here's my two cents... Invert the thinking altogether. Stop thinking of the gap, those absentee 25 year olds, as the problem. Stop thinking abut whose butts are in the pews anyway. Look at the gap and behold the church in honest reflection. That's the most honest picture of the church--not necessarily teenagers who like church for the free pizza and not the old folks who go out of obligation but the young adults who are too sensitive to inauthenticity to sit through another fake sermon. That's the church, the folks who are there because they've found something real in it, and the dishonesty which bloats up those other demographics is the real issue with which we need to deal moving forward.

I liked this post. I think we are definitely addressing more symptoms than the actual problem. Great thoughts.

WES I LOVE YOUR BEARD!!!