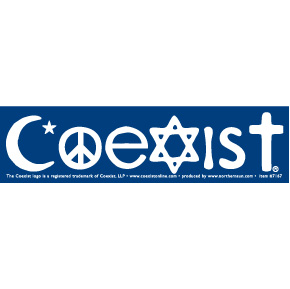 Should there be prayer in schools? Absolutely. But not just Christians prayers, not just generic prayers. There should be Islamic prayers, Buddhist meditations, Jewish prayers, and humanist reflections... One of the great challenges simultaneously facing the Church and the United States is the challenge of inter-religious suspicion. Just watch the 700 Club sometime if you doubt it and you'll quickly hear the tone of fear and the half-truth of propaganda whenever Muslims are mentioned. Some Christians are so fearful of every other religion that they can't help but be on the lookout for something to criticize. This kind of fear and ignorance leads to intolerance and eventually violence.

We're afraid of difference. This is reflected not only in violent intolerance but also in the pluralistic syncretism of progressive culture. Some people have so tried to emphasize the common ground of all religions (and certainly there is some) that they done injustice to the particularities of all religions. If I say, for example, that Muslims and Christians are the same, I'm not being fair to either Christians or Muslims. The fact is, we're different. We're making different claims about the world, about history, even about ethics. And that's ok.

I think that we need to teach not only inter-religious tolerance but also inter-religious difference. I'm afraid that this generation of teenagers has, generally speaking, lost their sense of difference within the sea of tolerance and inclusiveness. We need conversations that aren't always all about making sure that we try to agree in the end. We need to learn how to disagree well without losing the uniqueness of our message. I say this selfishly insofar as I want to preserve the radical and contrasting distinctiveness of Christianity but graciously as well, I want to affirm the dignity and the integrity of those with whom I disagree.

We need not fear our differences. We need not fear other religions. We should not always be out to criticize and raise suspicion. We should love our neighbors as we love ourselves. Indeed, perfect love casts out fear.
Posted by wellis68 at 4/27/2012 02:47:00 PM