Good Friday: Incarnation on a Cross 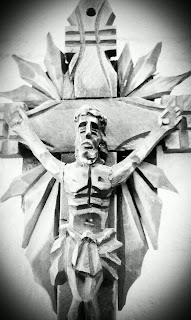 “Two rebels were crucified with him, one on his right and one on his left. Those who passed by hurled insults at him, shaking their heads and saying, ‘You who are going to destroy the Temple and build it in three days, save yourself! Come down from the cross, if you are the Son of God!’ In the same way the chief priests, the teachers of the law and the elders mocked him. ‘He saved others,’ they said, ‘but he can’t save himself! He’s the king of Israel! Let him come down now from the cross, and we will believe in him. He trusts in God. Let God rescue him’… In the same way the rebels who were crucified with him also heaped insults on him.
“…Jesus cried out in a loud voice, ‘Eli, Eli, lema sabachthani?’ (which means ‘My God, my God, why have you forsaken me?’)” (Matthew 27:38-46)

“My God! My God, why have you forsaken me?...
All who see me mock me; they hurl insults, shaking their heads. ‘He trusts the LORD,’ they say, ‘Let the LORD rescue him. Let him deliver him, since he delights in him.’ …I am poured out like water, all of my bones are out of joint. My heart has turned to wax; it has melted within me. My mouth is dried up… my tongue sticks to the roof of my mouth; you lay me in the dust of death. …a pack of villains encircles me; they pierce my hands and my feet. …people stare and gloat over me. They divide my clothes among them and cast lots for my garment. …You who fear the LORD, praise him!...
For he has not despised or scorned the suffering of the afflicted one; he has not hidden his face from him but has listened to his cry for help. ...Before those who fear you [God] I will fulfill my vows.
The poor will eat and be satisfied; those who seek the LORD will praise him—may your hearts live forever! …for dominion belongs to the LORD and he rules over the nations.
…Future generations will be told about the Lord. They will proclaim his righteousness, declaring to a people yet unborn: HE has done it!” (Psalm 22)

I am still amazed. Even now, after years of studying the Bible, I get goosebumps when I read Psalm 22 alongside the Gospel accounts of Jesus’ crucifixion. They are eerily similar, to the point that we have to assume that the writers had the 22nd Psalm lingering in their minds as they wrote of what happened. Perhaps it was just as eerie to the writers themselves.

And I’m sure that the writers wanted their readers to think of Psalm 22 as well because the psalm sheds a different light on the picture, one more layer of interpretation. You see, what we have in Jesus’ death is simply the common injustice of a poor man being tortured and crucified by the State. And that’s one way of looking at it. But part of the Eucharistic eschatological imagination of the previous night (Maundy Thursday) is being able to see one thing as another… calling the future into the present so that our interpretation of this experience is shifted thus to transform the way in which we go about moving forward from our present. Andrea Bieler and Luise Schottroff put it this way,


"At the heart of the paradigmatic imagination is the ability to see one thing as another. Seeing on thing as another implies the heuristic awareness of a variety of perceptual possibilities. Seeing the world as God's creation or as dominated by a master race or by the stock market will evoke different ways of imagining oneself in the world." (The Eucharist: Bodies Bread and Resurrection, page 24)

Psalm 22, as an interpretive lens, provides us with a specific perceptual possibility and invites us to reject the prospect that the final word on one such as Jesus is the word of death and crucifixion (which is a fair perceptual assessment prior to the resurrection). The key proclamation is that God "has not despised or scorned the suffering of the afflicted one; he has not hidden his face from him but has listened to his cry for help."

The Psalm opens our eyes to the injustice of what's happening on the cross. The Old Testament keeps us grounded here. When God "has listened to his cry for help" it's always in response to injustice and oppression. The first reference to God's hearing the cry of the oppressed is in Exodus 2:24 (and especially with the Passover meal having just happened, connections between Jesus' work here and the liberating work of God in Exodus are crying out to be made). The implication (from passages such as 2 Chronicles 7:14) is that God does not hear, in this way, the cries of "wicked" people. If the situation was just and right, this sort of prayer would not make sense. And yet this is Jesus' prayer from the cross, "My God! My God, why have you forsaken me?"

The injustice of an innocent, or of anyone for that matter, being tortured and hung on a cross to die might sound like a no-brainier. Truth is, it should be but it's not. This is a key issue to which we need to attend when we're piecing together theologically what exactly happened on the cross, when we're articulating atonement theology. We need to allow space for the injustice and shame of the cross. That's one of the major problems with the "penal substitutionary atonement" theory  which is so popular. It posits that the death of Jesus was, in fact, just and that God even demanded it in order for the world to be saved. God was just looking for someone on whom to pour out his wrath and Jesus was willing to take it so that God wouldn't have to be so angry anymore. Advocates for this view need to rethink how on earth they reached that conclusion and retrace their steps because it's deeply un-biblical. The proclamation here is that the afflicted one, Jesus, is indeed being afflicted and oppressed unjustly. Jesus in entering into solidarity with crucified people, God, through Jesus, is bearing the shame that so many in our broken world are forced the bear under the reign of powers and principalities that are contrary to the reign of God. Indeed, by entering into suffering with crucified people, Jesus is inaugurating the very reign of God, a kingdom where the crucified are no longer cursed under the authority of an empire--even the curse of sin and death which is behind all empires' curtains--but they are redeemed under the authority of a God who shares their affliction. "...For dominion belongs to the LORD and he rules over the nations."

What's the first image to come to mind when I say "incarnation"? Is it the baby Jesus at Christmas, perhaps? A manger scene? For some reason we usually exclusively equate incarnation with Advent and justification with Lent. But the truth is, they belong together. Incarnation and justification are two sides of the same coin. The first image which should come to mind, perhaps, when I say "incarnation" is the cross with Jesus upon it. Jesus' presence on the cross is the deepest and culminating image of incarnation--God with us, not just in a manger or in our history but even in our darkest, most shameful, and ugliest places.

Gregory of Nazianzus (4th Century A.D.) said it best when he said, "That which was not assumed is not healed; but that which is united to God is saved." In other words, if God takes it on, whatever it is, it's redeemed. So when God, in Jesus, takes on suffering and indeed injustice, it is redeemed and claimed under God's authority. The power was taken from Rome the minute they put God on a cross with rebels. Resurrection and vindication, therefore, are simply byproducts of incarnation. When God joins us in our shame and death, death and shame are defeated inevitably. Psalm 22 invites us to see this when we look at the cross. Without incarnation, the cross means just another dead rebel, another would-be Messiah put on display as a failure. And in lament, in a true human response, we should allow it to be exactly that on a fundamental level. That's the point of incarnation, after all, for Christ to enter true and utter failure so that failure itself is redeemed. That's the power of incarnation. "The poor will eat and be satisfied; those who seek the LORD will praise him—may your hearts live forever!"

God has heard the cries of Jesus from the cross and, because Jesus is one of us, Jesus' vindication--Jesus' own exodus out of slavery of death--becomes our vindication and exodus. Even in our deepest, darkest, most shameful places, the God of the universe who refuses to give up on this world is there. Emmanuel, God with us, illuminates our darkness. The cross itself is transformed from shame to honor. This is the means by which the whole creation of God, the creation of which humans are the pinnacle (however ironic that may be), is restored--from the bottom up. Because Jesus shared our suffering, we are invited to share his and thus experience vindication.


"Though he was in the form of God, he did not consider being equal with God something to exploit. But he emptied himself by taking the form of a slave and by becoming like human beings. When he found himself in the form of a human, he humbled himself by becoming obedient to the point of death, even death on a cross. Therefore, God highly honored him and gave him a name above all names, so that at the name of Jesus everyone in heaven, on earth, and under the earth might bow and every tongue confess that Jesus Christ is Lord, to the glory of God the Father." (Philippians 2:6-11)

As Cornel West once said, "I cannot be an optimist, but I am a prisoner of hope." The fact is, on this Good Friday, Jesus' death is a terrible reality--one which we see reflected in the lives of oppressed people everywhere, even right in the core our our being. We should not be so optimistic as to avoid that reality. But as people who are invited to see one thing as another with eschatological imagination, let us look upon the broken body of Jesus with hope that God's presence in such darkness means its' inevitable redemption.
Posted by wellis68 at 4/06/2012 01:18:00 PM