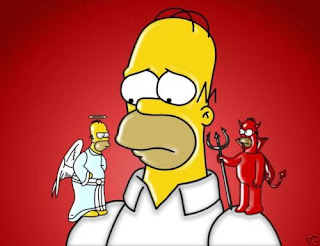 Someone recently asked me what I thought about demons, and to tell you the truth, I've never really felt like I had a solid conclusion on the subject. I am highly suspicious of the notion that there are creepy crawly things around dark corners who want to possess and coerce us to do bad things. This whole invisible battle scenario in which invisible monsters are attacking the minds of people has always seemed strange and very un-biblical to me.

The truth is, it's not all that un-biblical at first glance. Indeed there are stories in the bible of demon possession and we've got to deal with those things seriously. We've also got to deal seriously with the stories of people here and now who've experienced what they comfortably identify as demon possession or demonic interaction. I always try to maintain a posture of listening in this case because even though I have no first-hand experience with that sort of stuff and even though my view of scripture does not necessitate such things, I don't believe that anyone else's experience is subject to my own.

In the ancient world, many of the things that we now identify in scientific or medical terms were attributed to demons. Illness and mental illness and even malicious behavior were all seen in demonological terms. Now we've got medical terms for those things and while the importance of prayer should not be downplayed, and while having new terms does not necessarily make void the spiritual dimensions of these realities, we've got different ways of handling them.

But there's one more way that ancient people, including the first Christians, utilized the language of demon possession and satanic coercion. They used it to interpret political and systemic circumstances. Look no further than the book of Revelation for an example of this. The powers of the Roman propaganda machine and the oppressive economic system of the empire, even the military authorities, all are described in demonic terms. Though human beings are indeed involved and implementing the systems of oppression, ancient authors still chose to imply demonic, even satanic, quality to their work.

Now, even though it would be a cop-out to attribute all human evils to the supernatural, indeed the very concept of supernatural can be difficult to swallow, I think we'd all prefer to think that there's got to be some spiritual reality to all of this. We all subconsciously hope that there's something anti-human at work in some systems and atrocities. We may plant the seeds of injustice, but some of those monsters grow beyond our control. Take the Holocaust as an example. What on earth made enlightened westerners capable of such horrible things? There's something bigger at work. A system or an ideal has a way of possessing us and coercing us to make decisions that are not our own, decisions we would never make outside that uniform or outside that position.

The systems and ideals which lead to atrocities like the holocaust, slavery, the 9-11 attacks, and to war in general are spiritual in nature. It may be human insofar as it does not need to be attributed to some horned red dude with a pitch-fork, but it's certainly larger than us, it's certainly something beyond humanity, something dehumanizing. It's so even in situations that are not so obviously terrible. What, for example, gives a police officer the ability to gun down a suspect? What gives a soldier the ability to fire explosives into a building occupied by other humans? What gives a sniper the ability to pull the trigger, from half a mile away, and kill another person while they eat their lunch? Surely these are not decisions that they'd make according to their conscience in any other circumstances. They have to be trained and spiritually formed for something like that. The same qualities of systems that give someone the courage to kill, the audacity to buy a corvette in a world where half the people are in poverty, the entitlement to sue someone else for all they've got, are the same qualities that make a holocaust possible.

Leo Tolstoy dealt with these systemic qualities in terms of intoxication. 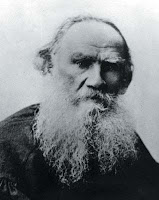 "The intoxication produced by such stimulants as parades, reviews, religious solemnities, and coronations, is, however, an acute and temporary condition; but there are other forms of chronic, permanent intoxication, to which those are liable who have any kind of authority, from that of the Tzar to that of the lowest police officer at the street corner, and also those wo are in subjugation to authority and in a state of stupefied servility. The latter, like all slaves, always find a justification for their own servility, in ascribing the greatest possible dignity and importance to those they serve. It is principally through this false idea of inequality, and the intoxication of power and servility resulting from it, that men associated in a state organization are enabled to commit acts opposed to their conscience without the least scruple or remorse." (Leo Tolstoy, The Kingdom of God is Within You, page 246.)

Even now, in our post-supernatural/enlightened age, perhaps we can attribute a spiritual and demonological quality to the sorts of forces which make us capable of that which we would otherwise be incapable. Power justifies everything eventually. Either our entitlement which comes from power or our servility and allegiance to it, followed by the practices and habits formed thereby, will eventually posses us and coerce our action. They have mysterious spiritual power and our best response is spiritual disciplines, forming the habits of God's Kingdom.

Things such as pledges of allegiance should be seen, in this case, as spiritual disciplines. Our allegiances to a State or to a flag are habit forming and, at their worst, can be a step in the direction of capacity for holocaust.

Christians are invited to be spiritually formed in a different direction. We are called to allegiance not to power but to a crucified king, not to force but to a slaughtered lamb. We are called not to civic duty but to prayer and fasting. We are being possessed not by the demonic forces of systems of power but by the Holy Spirit who makes all things new. We are invited not to a system of justified inequality but to love in the Body of Christ.

Perhaps we should take demons more seriously. Not as creepy invisible monsters, but as systemic allegiances and intoxications from which we must be delivered.
Posted by wellis68 at 4/19/2012 05:09:00 PM