"The Law was written for people who are sexual perverts or who live as homosexuals or are kidnappers or liars or won’t tell the truth in court. It is for anything else that opposes the correct teaching of the good news that the glorious and wonderful God has given me." (1 Timothy 1:10-11)

Well, you learn something new everyday. I must admit that until I took a look at this passage today, I did not know that it used the same word that Paul used in 1 Corinthians 6:9 (Arsenokoites), translated "homosexuals" or some variation thereof. This means, of course, that we are presented with all the same challenges and issues that we faced with 1 Corinthians 6:9. How on earth do you fully and contextually translate a word that nobody apparently used before Paul used it in his letter to the Corinthians, especially when Paul doesn't actually teach us what he means when he says the word? Well, we dealt with this in the last post in this series but the short answer is that whatever we come up with will be inherently speculative because of our limited understanding (a shortcoming to be attributed to us, not to the Word of God).

One way to look at it is to simply ignore the contextual element and say the author's condemning homosexuality in every way shape and form regardless of whether or not it would otherwise fall into the category of ethical sexual relation (namely, monogamous Christian relationships). As I suggested before, we need to distinguish between unethical homosexual relationships and ethical homosexual relationships (just like we wold for heterosexuality) and decide if Paul is talking about all forms or just the unethical ones. The literalist will likely be swayed by the perceived simplicity of saying that the author's talking about all homosexuality. Then you don't have to look at context, you can just insert your own context and project it onto the ancient text. But if we applied the same literalism to every verse, we'd have to keep women silent in all our churches (no answering the phones!), not to mention that such a reading is inherently isogetical, meaning that it imposes a modern context onto an ancient text.

Or we can read it exegetically, working to extract the original context from the text so that we can discern the original meaning. Then we can see what the text might actually have to say to us in our situation. Our conclusion, perhaps, will be no less speculative than the others but it will be less arbitrary and subjective because it will hinge on actual historical evidence rather than on our initial perception.

(You're welcome for the quick lesson on reading the Bible) 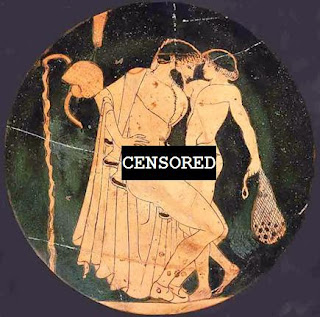 An exegetical reading of this text would require that we look to the ancient context into which the author is writing, that means reading his contemporaries. The contemporaries of the author of 1 Timothy (or at least the people who wrote in his general generation) including Plutarch, Philo, Seneca, and Dio Chrysostom spoke of a homosexuality that was essentially and necessarily abusive and lustful. Many in that day assumed that homosexuality was the product of the over-accessibility of sex among wealthy men (therefore it was often associated with the upper-class). They supposed that men were so bored with all the sex they were having with female prostitutes that they needed something different, like a switch to a different drug to get a different kind of high. They also commonly associated homosexuality with pederasty which was a common aspect of the education system of the day. It was common for a man to take on one young boy to be his student and it was almost equally common for the man to then seduce or force the boy into sexual relations. It can be said that he young boy was the most erotic sexual object of that culture and that the more masculine the boy became as he matured, the less attractive he became. As the practice of pederasty evolved in the Roman period a kind of system for child sex trafficking was formed along with the use of child slaves for sexual practice. Child prostitution and child sex slavery would have been tragically familiar to 1 Timothy's author because of his apparent familiarity with the Roman urban world.

It's also notable that homosexual (and heterosexual) practice was used in the worship of Aphrodite (at least in the city of Corinth). Men and women would essentially exchange roles  and engage in sexual intercourse with folks of their own sex in order to experience the fullness of Aphrodite's sexual side that differed from their own.

It's also notable that people of the first century may well have been exposed to what I've called ethical homosexual relationships. But the question here is, which kind of homosexuality is being talked about in 1 Timothy? Assuming the author would not have made the sociological mistake of lumping all of these types of homosexuality into one. He certainly didn't lump all types of heterosexuality into one, otherwise he'd have had to condemn sex in general as sexual immorality. If he assumed that all homosexuality was exploitative and abusive, he would have been wrong.

Was the author talking about sex-slavery, insatiable lust as a result of excess, child prostitution, idolatrous worship of Aphrodite, the rape and emasculation of a male slave, somebody turning gay 'cause they don't fit in with so-called straight people, or gay couples who love one another and want to be married? Which type or types is he talking about?

Now, other than just closing our eyes and pointing, how do we discern the real object of the author's condemnation here? Well, conveniently, there are helpful inductive tools in the text. First of all, the author lists "sexual perverts" right before "homosexuals" and so we can assume that he's talking about a type of homosexuality that is essentially perverted. Now of course some might want to argue that all homosexuality is perverted, but that's a stretch. Secondly and more importantly, he lists "kidnappers" right afterward. Isn't that interesting?

Who are kidnappers? Well, people who coerce children to be their sexual partners or offer them up as sex slaves must qualify. If there is any link between perverts, homosexuals, and kidnappers in this context then it's safe to infer that this passage is talking specifically about pederasty and the exploitative homosexual practice associated therewith.

So we can take this short list of vices as a list of generally bad things without getting hung up on  each word. We can look elsewhere in scripture for more specific moral teaching (like maybe the Sermon on the Mount) and move on the the true point of the passage--a theological point about the function of the law in the teaching of the gospel of Jesus.
Posted by wellis68 at 4/17/2012 03:09:00 PM