Virtue and Confession: Thoughts on Soteriology

If I've said it once, I've said it a thousand times... it's not our job to figure out who's in and who's out. And yet constantly I hear it, the evangelical anxieties of post-mortem soteriological certitude. I suppose that we can put the blame at least partly on the shoulders of Martin Luther, but for whatever reason our concern for the real-life well-being of peoples and individuals and for the actual living-out of the gospel has been overshadowed by our fear of hell and our need to know where people are going when they die. We've overemphasized the notion of "getting saved" (as though salvation is some sort of status we acquire by thinking the right thoughts) and we have under-emphasized discipleship--the life in participation with the values of the Dominion of God. Relatively obscure passages from Paul's Epistles have put the Sermon on the Mount--the central and foundation exposition of Jesus' teachings--in the backseat.

This whole conversation is somewhat old-hat, as in the past decade, even those among the most conventional and conservative evangelical voices (I'm thinking especially of Francis Chan and his book Crazy Love) have called this perspective into question. But even those voices often undercut their own emancipating message by returning slavishly to a sharp focus on post-mortem destination. They can't quite figure out how to think of things in any other framework. This is why so many in this camp jumped to the conclusion that Rob Bell must be a universalist after the release of Love Wins. They couldn't figure out what he was talking about and his scope for discussing the salvation of the world was too wide for their scope. If it doesn't fit the traditional "Christians in, everyone else out" categories, then it just doesn't fit.

The fact is, the Gospel of Jesus is bigger than our categories and the God of the Bible is much bigger! 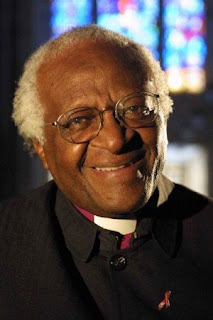 I recently watched a great documentary called Nobelity (I recommend it!). Near the end, Desmond Tutu was interviewed and he said something that I've been rolling around in my head ever since. He said, "I don't think God was disappointed that Gandhi was not a Christian" and he went on to say, "God is not a Christian." Now of course, this concept is shattering to our evangelical sensibilities. "How can this be true?" We wonder. And our minds immediately leap to our post-mortem/disembodied soteriologies--"does that mean that Jesus is not the only way to heaven?! ...What about the whole 'way, truth, and life' thing?" But the answer to those questions in regards to a statement like that is, "not applicable." If we weren't so obsessed with the exclusivity of Jesus (which is thoroughly true) we would not miss the beauty of a saying such as this. If we weren't so overly-obsessed with confession--what people say--and so un-obsessed with virtue--how people live--which seemed to be Jesus' major concern, we would not have any problem appreciating a life such as that of Gandhi. And we'd be able to appreciate that God refuses to inherit our prejudices, God is bigger than our Christianity. Muslims, Jews, Atheists, Hindus, and even Mormons can participate in the life of God through Jesus, despite their theological confession. If we weren't so concerned with whether or not they are going to hell--something God never meant for us to try to handle--then we'd be able to celebrate the inclusive universal scope of God not-precluded by the distinct and exclusive revelation of Jesus Christ.

A disembodied soteriology--a theology of salvation whose chief concern is the afterlife--cannot handle the largeness of our God. It is incapable of celebrating the work of God on the largest historical and incarnational scale.

The outcomes are not our concern, only participation in the means is meant for us. We are to make disciples, not just "believers." We are to call and invite people into the life of Christ so that Christ might dwell in them, not to make sure that their souls don't go to hell. Perfect love casts out all fear. What are we so afraid of?
Posted by wellis68 at 3/09/2012 06:33:00 PM

It's hard to tell which comes first, the Navel gazing of the evangelical world (with its fear/mistrust of outsiders) or an emphasis on post-mortem destinations.

And the whole belief/action is such a messy knot too. Let's say we wanted to break the bubble a bit and encourage Evangelicals to just hang out with sinners and tax collectors. I don't mean evangelize, I mean, just hang out. Encourage evangelicals to be friends and befriend with no eternal, other worldly, concerns. Can people truly suspend the heaven/hell stuff enough to do that? And if we do wind up suspending the heaven/hell stuff, do we still need it?

Good thoughts Jin-roh. Perhaps the emphasis has been placed so heavily on the atonement that we have lost track of the incarnation. We have become sadly incapable of just "hanging out" and loving people without our agendas. Or, to put it differently, we have sacrificed the great command in the name of the great commission.

Wouldn't a balance be nice?