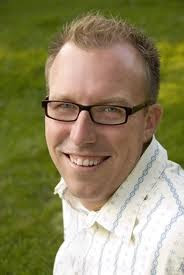 Yesterday I started reading Tony Jones' new e-book called A Better Atonement. Tony has been a teacher of mine (though we've never met... and I'd love to meet him) for the past several years and I've always enjoyed his contributions to the the theological conversation, especially concerning ecclesiology. He's somewhere near the top of my list of favorite ecclesiologists and his thoughts on the church and on doctrine have always been helpful and thought provoking. So far, A Better Atonement has proved to meet that standard.

I had some thoughts about the first section which contains his thoughts on the doctrine of Original Sin, which he openly and enthusiastically rejects. He walks us through some of his initial intuitions and then examines the scriptures and history (adequately supporting, along the way, his rational behind doing things in that order). There were one or two points on which I didn't feel he had adequately supported his argument, but was still inclined to agree with him. I agreed with his criticisms but I wasn't always convinced that he was really criticizing Original Sin altogether. Surely, he is making a distinct departure from the traditional view on the doctrine, but in my reading, I kept feeling like there was something missing. I felt like even with his rightful criticisms, there was something salvageable about Original Sin.

For Jones, the hinge on which Original Sin swings is how the guilt of sin is passed down genetically and (at least by implication) individually. I don't know if "yes" or "no" are really sufficient responses to that notion. I'm more inclined to respond "not applicable." Tony dismantles the concept in some ways but leaves he conversation open in others. He talks of "proclivity to sin" as an alternative but does not speak of origins. Where do we get our proclivity to sin? How do we explain it? Are we as individuals guilty or not?

I'm not so concerned with those questions. For me, the more important hinge is whether or not we are villains or victims. Must Original Sin mean that we inherit personal and individual responsibility for sin (because of what Eve & Adam did) or can it speak more to the fact that we are "born into" subjectivity (a victim status) to sin? Though it's not a traditional definition, could we not speak of Original Sin in terms of our subjectivity to our context? We are born into a brokenness, historically if not metaphysically and we cannot examine our responsibility in the world in objectively in isolation from our context. In this way, Jesus's incarnation offers some revelation. Jesus, let it be assumed, was not sinful from birth (or at all) but was born into sin insofar as he was surrounded by it. Jesus took responsibility for and acted in resistance to sin despite his apparent individual innocence to it. As followers of Christ, this is the greater issue for us as well. Our guilt is not an issue but our invitation to resist sin and bring healing to the brokenness is, and to be purged of our complicity with unjust and dehumanizing patterns. Original sin is an historical reality, cast in a narrative, and stands as such over against the traditional view which seems to be looking altogether in the wrong direction (toward questions of individual and personal guilt). To answer the question of whether or not we are born into sin, simply read the newspaper and look at your family tree. The problems we are dealing with in the world and in our own personal lives are older than we are and, incarnationally if not judicially, we have the responsibility to take ownership of them.

We were born into a storm, the origins of which are described (figuratively if not historically) in Genesis, the end of which is possible only from outside our own efforts, only from the work of Christ on the cross. So figuring out how it is passed down is irrelevant. Same with "total depravity," it's not about whether we're completely broken or just a little broken, Pelagius and Augustine both had it wrong on at least one important level, it's about whether or not we, by our own work, can save ourselves from this storm that has been raging long before we got here. This is how I'd like to talk about Original Sin, even if it is on many levels a complete redefinition of the doctrine.

I am not totally sure where Tony is going from here (though I could guess and I am excited. I trust it's going to get better and better as he tears into the atonement) but I suspect that this narrative approach (or redefinition) to Original Sin, rather than the attempt to dismantle the whole concept, may have provided some good foundation for speaking about the nature of Jesus' birth, death, and resurrection.

I'm so appreciative of Tony's work here and I highly recommend his new little e-book as a supplement for your reflection on the cross and resurrection as Easter approaches. I hope you find it as thought provoking as I have so far.
Posted by wellis68 at 3/23/2012 02:16:00 PM

Wes - Your thoughts are eloquent and spot on and reflect some thoughts I've had in the back of my mind for a few years.

I grew up with the opposite perspective (Arminean) and a distrust of Original Sin. Studying theology made me start to rethink that, and you've hit on the crux of why I now think there is some validity to original sin - there is some sort of inherited sin that we all face; technicalities of how it is passed on (genetics?) are irrelevant.

When you mentioned the issues of being '"born into" subjectivity (a victim status) to sin', my mind immediately goes to Christus Victor (great book by Aulen... you should get it if you don't already have it... Doc Ok used it quite a bit when discussing atonement). This notion of humanity subjected to sin gives credence to the Ransom and Christus Victor theories with some NT Wright thrown in: Christ came to free us from sin and death; he is victorious over the powers that hold the world hostage; and he is even now setting all things to rights.

It's a very different perspective from the Latin understanding of the atonement - that we are personally guilty before a just God and that Jesus atones that guilt. It's not to say that this isn't valid, but maybe we've overused this theory and it's lost the depth of meaning it might have had in another time. Maybe overused is too strong - maybe it just doesn't have the relevance it once did.

But to say that the Latin (penal substitution) theory isn't overly relevant isn't to say that the sacrifice of Christ has no value today - we do have other theories (as mentioned above) that have just as much depth and historical acceptance, and maybe it is toward those theories that we should turn our focus.

Christopher, thanks for your comments. Great stuff! I think that there is something (even if not everything) to be said about keeping things fresh. Even if a theory is "right," it can lose its value if it gets stale and loses its potency. Rightness is overrated. Theology is organic.