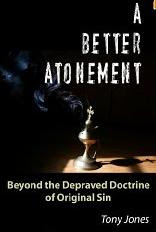 I just finished reading Tony Jones' A Better Atonement, so I thought I'd offer some initial thoughts on it.

Although I had my issues with the first part, the stuff on Original Sin, it just gets better as you go. Jones does a great job unpacking some traditional and contemporary views on the atonement and leaves plenty of room for the reader to harmonize ideas together. Whereas Original Sin, as defined by Jones in his first section, passes guilt of sin onto us making humans the object of God's wrath, Tony's revealed preference (over against Original Sin) is to see humans more as victims of a "godforsaken" experience (implicitly inherited from Adam) into which Christ enters incarnationally, bringing redemption through God's solidarity with people in their most godforsaken places.

This view, the "Solidarity theory," is in harmony with the theology of Jurgen Molmann (perhaps most exclusively), but I can think of a few other theologians who speak to it as well. Most notably, I'd say, N.T. Wright, who I'd usually pin as a Christus Victor guy, makes clear arguments for the "solidarity model" (I'm thinking of quotes from his book Christians at the Cross).

In his support for the Solidarity theory, Jones is totally speaking my language. And, as he allows, there's room for synchronization among various theories. For example, though Jones sees no real  personal need for the Christus Victor model, presupposing a dependence on a specific "demonology," I see no need for such a presupposition. Christ's victory over powers and principalities needs not be cast in a demonological framework in order for it to have relevance. Cast it somewhere closer to home; perhaps in political, economic, and social realms (and there is a demonic quality to the injustices and dehumanization which occur in those realms as well). The curse of sin, that under which humans have been oppressed (call it godforsakenness or whatever), does it's worst to us all the time. Christus Victor is not just about the defeat of Satan and demons (spooky stuff). It's the curse of sin, it's godforsakenness doing its worst to Jesus, just like it does to us (hear the connection to solidarity yet?) and Christ emerging victorious. I would say there's significant connection and overlap between the solidarity theory and Christus Victor, I'd even go as far as to say that Christus Victory is the true "end" of the solidarity theory. When we engage in solidarity with the crucified Jesus (recognizing that it was actually God who made the first move in solidarity with us), we share in his victory over death.

Likewise, there's overlap and connection between various theories, especially in specific contexts. Indeed, some of the distinctives come dangerously close to mere semantics. But this book does well to clarify things and avoid the semantic arguments. Jones does well to get down to the foundations of the atonement theories.

A Better Atonement is a great exploration of some of the big questions surrounding the cross and resurrection of Jesus. What happened on the cross and what was it all about? Jones provides a great alternative to the worn-out Penal Substitutionary Atonement theory and offers a great starting point for discussion. I recommend this e-book as a great addition to the conversation and a worthy read for anyone who's asking questions about the atonement, especially for those who are not quite comfortable with the traditional theories that have been so popularized in the Evangelical movement.
Posted by wellis68 at 3/29/2012 03:38:00 PM