There is a huge difference between success and excess. 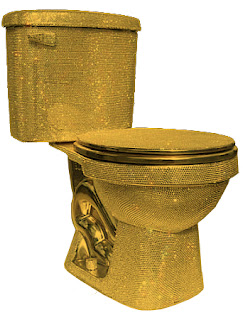 In American ideology, the sum of one's capitol gain directly correlates with the measure of one's success. In other words, how much you make is what tells you how successful you are. A successful business man, for instance, is someone whose paycheck is bigger than other less successful or unsuccessful business people. And the sky's the limit, here. The more someone makes, no matter how high that number is, the better. Not presuming that money grows on trees, we can assume that if someone were to make for themselves all the money that could be had, leaving everyone else with nothing, that person would have to be considered the most successful person in the world. It makes it quite obvious which people are most valued and respected in our culture. We should look up to and emulate the wealthy. And it appears we're comfortable with this form of measurement. We won't elect a poor president, will we?

In the Kingdom of God there seems to be a very different way of measuring success. In God's dominion, this kind of success is pretty much irrelevant. Those who make more money are no more valued than those who make nothing. If anything, it's the other way around. James writes, "Has not God chosen those who are poor in the eyes of the world to be rich in faith and to inherit the kingdom he promised those who love him?" (James 2:5). And Jesus said, "So the last will be first, and the first will be last" (Matthew 20:16). In God's kingdom, the poor are valued, and the oppressed are favored. Overall, the Bible has anything but nice things to say about rich people. Jesus said, "it is hard for someone who is rich to enter the kingdom of heaven..." (Matthew 19:23). In Proverbs it says, "One who oppresses the poor to increase his wealth and one who gives gifts to the rich—both come to poverty" (Proverbs 22:16). In one of Jesus' most fundamental teachings he warned, "...woe to you who are rich, for you have already received your comfort" (Luke 6:24). Perhaps the strongest words are from James, "Now listen, you rich people, weep and wail because of the misery that is coming on you" (James 5:1. See also the following verses).  While in the American version of success, the one who gains all the wealth in the world is the most successful, in the Bible it seems that such a person would be regarded as the opposite, as one on the receiving end of some pretty harsh judgement.

Proverbs 2:7-8 says, "[God] holds success in store for the upright, he is a shield to those whose walk is blameless, for he guards the course of the just and protects the way of his faithful ones" (italics mine). Success in the bible doesn't belong to the rich, it belongs to the upright and the just. Justice in the Bible is not blind like it claims to be in America. In the Bible, justice is on the side of the oppressed and those who have little. Justice is about making things right and that means it's goal is to see that the poor get what they need and the oppressed are no longer oppressed. Isaiah provides something of a definition, "Learn to do right; seek justice." How? "Defend the oppressed. Take up the cause of the fatherless; plead the case of the widow" (Isaiah 1:17).  Success goes hand-in-hand with justice and justice is about caring for the poor. So in the scenario where one makes for themselves all the money in the world, their success is contingent upon what they do with it. Will they use it for justice, seeing that the poor get all that they need including their dignity? or will they go out and buy a jet ski and a Cadillac for themselves? What we commonly and casually refer to as "success" in America is what you might more accurately call "excess."

As Tony Campolo once put it, "there's nothing wrong with making a lot of money, there's something wrong with keeping it." It's hard for the rich to enter the kingdom of heaven because it's so hard to let go of wealth. It's so hard not to hoard it and put it in Swiss bank accounts and use it to trick out your car and spend it on nice houses and fancy vacations. It's hard to let go of excess. It's hard not to value our dollar more than we value the children in sweat shops and the women who are being abused. It's hard to give our wealth away. And yet, in a world where more than half of us are living in poverty, that's precisely what's required of us, especially those of us who have more than we need--to let go of our wealth for the sake of our neighbors (how much harder is this when you don't know your poor neighbors?).