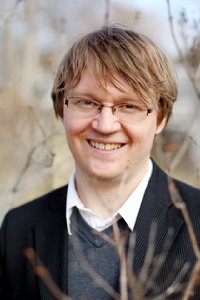 “I think it is true. I think death does wear a helmet. We too often think of death as only the end, as only the last moment, but death puts on its hard hat and goes to work much earlier than the last moments before we stop breathing. Death is at work in the lonely longing of friendless fourth-graders, in the failure of a husband and wife to communicate, in the depression and defeat of another failure to figure out what we are going to do with our lives. Death wears a helmet, not only because death collides with us before our last breath, knocking us around from our beginning to our end, but also because death has constructed places for itself within the very structures in which we live. Death is experienced not just in our individual feelings, not just in the action we do or neglect to do to each other, but in the very institutions and bureaucracies that organize our lives. Death wears a helmet because death is found in the structures of society…he is wearing a helmet with official institutional logos on it. He seems so honorable, so in control…He is wearing a helmet, but he is a gangster, intimidating me to toe the line or else feel it where it hurts…And the monster, behind his perfectly shined helmet, just smiles while my anxiety of pretend need keeps me existentially committed to the structures as the way they are.” -Andrew Root

I read the above quote from Andy Root (one of my favorite theologians) on a blog this afternoon and I couldn't help but be captivated by it. I've often found myself searching for words to describe the transcendental nature of death, to make sense of how death is really behind the scenes of the empires and systems of the world. I've had students return my explanations with blank stares enough times to know that it can be hard to grasp and hard to see the presence of death in daily life. Blinded by the allure of prosperity and illusory success, death is hidden from our eyes. But as Andy said, "death puts on its hard hat and goes to work much earlier than the last moments before we stop breathing" and the systems of power and coercion thrive on it. If we deny the power of death within the systems of the world here and now then surely we will, on at least one important level, miss the point of the resurrection.

1 Corinthians 15 is like a treatise against death. In it, Paul proclaims, "For he [Christ] must reign until he has put all his enemies under his feet. The last enemy to be destroyed is death." He goes on to say, "I face death every day..." The relevance of the resurrection is more than just for one final day when we take our last breath. The defeat of death is the triumph of Christ over all the principalities and powers that are readily present right now in the world around us. Death does not get the last word and it does not get to make claim on us now or ever. For resurrection is every day and we are invited to deny the structures and institutions of death and live in resurrection now in the face of death today.
Posted by wellis68 at 2/29/2012 06:00:00 PM