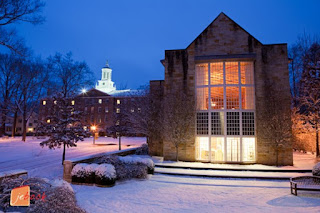 About six months ago I received news that my MDiv. program at San Francisco Theological Seminary in Pasadena was being eliminated. My first thought upon receiving this news was casual. I thought I'd simply transfer to a different school, a smaller more local school, knowing well enough that it may not be a perfect fit for my particular needs and personality. If you've been reading this blog for long, you'll know that Bethel is not a perfect fit and Fuller is good but not perfect either (not to mention, they're pretty tuition dependent which means that scholarships are more difficult to come by). But my casual reaction was overwhelmed by a nagging sense that God had something else in mind. I had searched hard to find the somewhat obscure SFTS program in Southern California. I had determined that a change of context would be extremely valuable since I had already received a healthy dosage of theological content in my education at Azusa Pacific University (a school whose theology program is good at over-preparing students for seminary content ((that's a compliment))). SFTS had provided that change of context and now it was being taken away. It was more than coincidence that my first year in a 25-year-old program would be the year of its closing. That, accompanied by a series of other influences and circumstances, compelled my wife and me to consider a radically new and less familiar direction.

When I was at APU, I had a few professors who greatly influenced my theological development, not least of whom was Dr. Dennis Okholm who received two degrees from Princeton in New Jersey. Since then, the idea of going to Princeton had been an appealing concept and became more-so as the idea marinated in my brain over time. A dream of sorts, maybe, but one that remained outside the realm of reality... indeed I am no shoe-in at a place like that and it's a million miles across the country from family, friends, and the students at my church with whom I've grown and loved over these years and to whom I have been so committed. But when the abrupt disruption of SFTS's Southern California closure occurred I could not ignore the possibility that God wanted to use just such a disruption to invite me to consider the inconsiderable. One of my professors at SFTS, when talking with me about my options in light of SFTS's closure, not knowing that I had ever thought about Princeton, said, "I don't know what you and your wife really have in mind, but perhaps you might consider somewhere further away... like Princeton." I could not ignore that. I decided to take the season of Lent to focus on praying and discerning the future.

In October, through much prayer and discernment, I decided to swing for the fences and I applied at Princeton Theological Seminary. This past month, as somewhat of a surprise, we received a letter of acceptance. Through even more prayer and discernment, we decided to accept the invitation to begin studying at Princeton in the Fall of this year. While certainty is nowhere to be found in decisions such as these, we are confident in our sense that God is calling us, inviting us to take this unexpected new direction. We will be leaving Ramona and First Congregational Church in August of this year. And though we are excited to follow God's call, it is truly hard to imagine leaving this church family we have known and loved for so long.

As I told the students the news, their parents were receiving an email at home... and if they didn't get that, I sent students home with a letter to deliver to parents explaining the decision. Making the announcement to the students at Youth Group on Sunday was perhaps the most difficult thing I have had to do in ministry so far. These students have been our priority and we wanted them to hear it from us before they heard it anywhere else. We love these students more than we are able to express and we love this wonderful church nearly as much. It broke my heart (and perhaps that expression is too trite to express the truth) to tell the students that we would be leaving them in August. I felt that I was telling them that I would be abandoning them and I have never felt so helpless in helping them grieve... since, of course, I'm the one causing the grief. We had a good conversation about how we could spend the next six months walking through this transition together and how important it is to simply trust God and to trust that God is good in this question-mark, in this threshold of life.

Though this is exciting news, it's cause for a grieving process. It is hard to imagine such a drastic change in direction. It is difficult to imagine leaving my students. It is difficult to imagine leaving my family, even for three years. But I do trust, with eyes of faith, that God--the God who has set these things in motion and has made such an opportunity available to me and my family--is love.
Posted by wellis68 at 1/31/2012 05:31:00 PM

Wes, congratulations on being accepted into - and accepting - the program at Princeton! I know you'll do well.

I understand your ambivalence, even grief, at separating from relationships that have nurtured you and been nourished by you. I know what it's like to strike out across the country with very little waiting for you except the unknown.

However, I trust that you'll find a supportive community in NJ that will uphold you in those many moments when loved ones (and all things familiar) seem far away. And remember that you are part of a wider community than Ramona.

Let us know when you're moving, and feel free to stop in Mid-Mo on your way east. It'll be good to see you and Amanda again!

Steve,
Thanks for the encouragement and thanks for the recommendation letter! (I sent you a thank you card... you'll be receiving it soon!!!). You've been an amazing encouragement in getting me to where I am today. We'll be moving in late August and we'd love to stop by and say hello to you!!!