are love and justice in competition?

Right after Rob Bell's most recent book Love Wins was released, there was a poop-storm (that's a technical term I like to use in place of "frenzied buzz of conversation"). Unless you've been living under a rock, there's a good chance that you already know that. While all of this conversation was going on, however, I was more interested in how the conversation would plateau and settle. Conversations usually do reach a point of consensus, though things worth talking about will rarely reach total resolution. For example, however people might bring up peripheral reactionary arguments, there is a plateau, a general consensus, in the conversation concerning The Civil Rights Movement. Looking back on what was, at the time, an extremely convoluted, emotional, and complex political, sociological, and philosophical conversation, we have simplified the conversation down to the consensus that segregation laws are bad and people should be treated equally (word of disclaimer: I know that for many, The Civil Rights Movement is still moving and I am aware that even given the popularity of the consensus view of this historical phenomenon, racism is alive and well and we, each in our own contexts, still have a long way to go and must strive toward a society that does not operate on racial and class assumptions).

The Civil Rights Movement is perhaps an extreme example, but the conversations concerning ideas and books and Rob Bell's book in particular come to consensuses as well... though their particular importance may be much shorter-lived and even less important. Since it came out, I have wondered just how we'd simplify the popular conversation on heaven and hell. And I have to say, I'm somewhat disappointed with how this conversation has plateaued in evangelical circles. 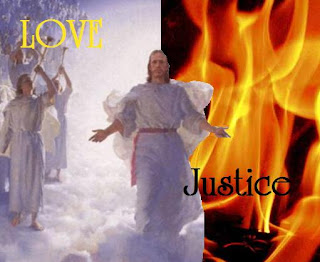 It seems that the consensus among many of the people in my circles has been that Rob Bell said some good things (and not all are even willing to concede to that) but overemphasized love and under-emphasized justice. "Yes, God is loving," they'll say, "but he's also just"... as if that's supposed to make room for Hell in all it's traditional glory. They seem to think that God's love might want to save everyone but God's justice just won't allow it... like they're in contrast with one another.

The reason I'm disappointed is that we are solidifying a consensus around a false dichotomy. What do I mean? We are assuming that love and justice are opposites, that justice picks up where love leaves off. As though justice can justify what's otherwise opposed to love. As though love must forfeit its dreams to justice. God's love wants you to be saved but God's justice wants you to burn in Hell forever. Good news, huh!?

If this is the case, I must say, I am rooting for love to win.

But I don't think that God's justice is antithetical to or in competition with God's love.

Our judicial philosophies in American culture are dominated by the idea that we must "settle the score," that justice is making sure that people get what they deserve for the wrongs they've done. If someone murders someone else, we figure they deserve to get murdered and our justice system helps us get those results. If someone does something wrong, we figure that they should be punished. Thus, our concept of justice is just about synonymous with punishment. It's "an eye for an eye"... but I think Jesus had something to say about that...

The truth is, justice is quite different in the Biblical narrative. Justice is not primarily about tit-for-tat. It's not primarily about making sure people get what they deserve... otherwise, there's nothing just about forgiveness at all. In the bible, justice is synonymous with righteousness (צֶדֶק) and righteousness can be thought of as a relational term for right-ness... when there are right relationships. Justice is not essentially about punishment or settling the score. Essentially, it's about making things right. Justice and forgiveness go hand in hand since forgiveness is about mending broken relationships. You could say that justice is about clearing a path for forgiveness. So where does love come in? The beginning and the end.

Love is not the antithesis of justice. They are not opposite sides of a coin, and they are not equals! Love transcends justice. Justice is defined by love. Love is the presupposition and the object of justice!

If justice is about making the world right, bringing it in alignment with what God intended for things, then justice and love share the same imagination for the world. For God created the world out of love. It is for love that things exist. Love is the stamp on the world as it should be. Love is what things would look like if they were set right. Love is the goal of true justice, not it's opposite!

The good news is, justice has been done through the work of Jesus Christ. Jesus let injustice do it's worst to him and came out victorious.  The world has been set right and forgiveness has been laid out. Justice is the total and utter salvation of the world through Jesus Christ and justice is now being implemented!