An Interpretation of Revelation 20:1-10

The following is a section from the notes I've been putting together for our Book of Revelation study in our Youth Ministry. I have been very thorough in my notes. I guess it's because this book is so enigmatic and I don't wanna mess anything up. I always have WAY more notes than we actually cover in youth group. Since there is little chance I'll actually get to use this part, since I doubt we'll be talking about millenialism, I thought I should share it... after all, I did the work.

Revelation 20:1-10:
Historically, this has been one of the more confusing passages in scripture. There have been three major theories about how we should understand this millennium. Postmillenialism, premillenialism, and Amillenialism.
Postmillenialits—“anticipate that the eschatological return of Christ will occur after an earthly golden age,” (i.e. the millennium).[1]
Premillenialists—“expect the return of the Lord prior to the thousand-year period. Thus Christ’s coming is ‘premillenial.’ Jesus will be physically present on earth to exercise world dominion during his thousand-year reign.”[2]
Amillenialism—“The word ‘amillenialism’ means ‘no millennium.’ …amillenialists anticipate that the second coming of Christ will mark the beginning of eternity without an intervening interregnum.”[3] Adherents to this view regard the thousand years as a symbolic number to be interpreted as “a very long time, extending from the first coming of Christ to his Second coming.”[4]
Each of these interpretations faces its own challenges in the text. Whatever the case, this brief section of the text is hard to interpret. I will suggest an interpretation. 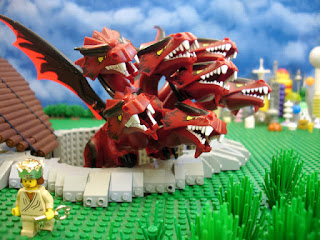 This is part of the flash-back we saw in 19:17-21 (We see what was really going on behind the scenes of what looked like failure). The author is providing a “revelation” of what happened when Christ died and rose from the grave. Satan, the dragon, was thrown into the abyss when Christ rose from the dead and defeated him. Christ gained authority over death and thus overthrew its master, the dragon. Verses 4-6 describe the earthly and heavenly reign of Christnow initiated, being implemented, in the Church. The Kingdom of God is truly “at hand” (Mark 1:15). The first resurrection is spiritual and serves as a description of what happens between death and the final physical resurrection.
By this interpretation, we are living in the reign of Christ right now. It is the truth of the world even though, by observation, it seems that the “kings of the earth” are still in charge. Death has been defeated, but the reign of God is still being implemented. As Paul puts it, “he [Christ] must reign until he has put all his enemies under his feet. The last enemy to be destroyed is death.”[5] Christ is reigning even now, until his enemies are defeated. The finality of this implementation will be climactic. This climax, when the defeat of Satan becomes apparent on earth, is described symbolically in the release & final defeat of Satan in (19:7-10).
Deciding when the description travels from past to future is not completely arbitrary (otherwise, that would be the weak point of the interpretation). Keeping in mind that the two passages are not otherwise directly related, it travels along with 1 Corinthians 15:25-26. “He seized the Dragon… to keep him from deceiving” (Rev. 20: 1-3) & “He must reign…” (1 Corinthians 15:25), that is now. The binding of the Dragon & the subsequent reign of Christ are the result of the death and resurrection of Christ. “The Devil who deceived them was thrown into the lake of burning sulfur” (Rev. 20:10) and “the last enemy to be destroyed is death,” that’s future.
Satan and death have already been defeated through Jesus' death and resurrection but we still need a climax. Our salvation must still come from outside this world. Christ is reigning now, until death is finally defeated. This is the “millennium.”