Am I a Preterist? 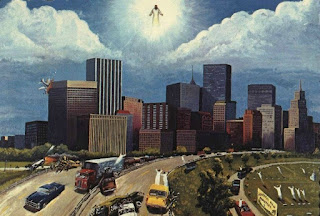 Am I a Preterist?

This question has been rolling around in my head ever since last week. Somehow the term came up, somewhat casually, in a conversation I was having with a few other youth pastors. Another, who apparently didn't understand the term, asked us what it meant. The quick answer from one was, "it's someone who thinks that everything from Matthew 24 already happened in 70AD."
Most who were there sort of chuckled at the concept as though it was far beyond the realm of exegetical orthodoxy. But, being that I'm teaching the book of Revelation right now in our ministry, I kept thinking about it. It has been a while since I've brushed up on my terminology--premillenial dispensationalism, progressive dispensationalism, preterism, amillienialsm, postmillenialism, etc.--but I am at least aware that preterism goes beyond Matthew 24 and includes at least the book of Revelation. A preterist, as I understand it, connects all New Testament apocalyptic and eschatological imagery to events and circumstances of the first century AD. In other words, a preterist is marked by their conviction that it all already happened. The Beasts in Revelation, happened; the whore of Babylon, happened; the seven seals and trumpets, happened; the destruction of the Jewish Temple, happened... obviously. And so, for the Preterist, the majority of the eschatological weight of the Biblical narrative lies in the past and leaves the future open for speculation, to be lived faithfully according to the narrative of what God has done in Christ.

And so I look inward... How have I been teaching this book? How have I been talking about Revelation? Well, truth is, terms like preterism and dispensationalism have been miles away from my work in Revelation. Until this morning, I hadn't thought much about how to classify my approach. In some ways, it's never fair to categorize something... it always makes it harder for us to actually hear. If I am asked about my approach, I describe it simply as "apocalyptic." I try to read Revelation as an Apocalyptic text, sensitive to its actual genre. Now, I realize that such a response is presumptuous and might imply that others are reading the book outside its' genre and/or context... and maybe I am implying that. What I try to communicate is that I don't try to frame the book as some eschatological code book to unlock the secrets of the "end times." Indeed, as an apocalyptic book, it's as much or more about the present than it is about the future. It's not about the "end" as much as it is about revealing a new and different way for the original audience to interpret their current situation--with a clear picture of what's happening behind the scenes.

So, am I a preterist? Oh yeah, I still haven't answered that one. The answer is yes and no.

Yes. If you're asking if the images, narratives, and symbols of the book have already taken place, then I am definitely a Preterist. If the author was not thinking of the Roman Empire and of the persecution of the church in at least some of the descriptions therein, then he was more dense than I thought. If Caesar is not a beast, if the propaganda of the Pax Romana and the military muscle that implemented it were not a beast, and if the economic system of Imperial Rome was not a whore (sleeping with the rich at the expense of the poor) then I don't know what is. Those descriptions work perfectly for the context of first century Christianity. Indeed if you are not on the lookout for contextual continuity as a guide for interpretation then you're just not doing good exegesis. So of course I am a preterist.

But, simultaneously, no. If a Preterist is one who attributes the imagery of apocalyptic literature only to past events, then that's not me either. There's a reason that the author didn't just come out and say, "Beast 1=Rome, Beast 2=Pax Romana & Roman military, and Whore of Babylon=corrupt Imperial economic system." Surely, if that's all that those images are supposed to portray (or something like them), then it would have been easier for the author to just say so. But that's the point of apocalyptic imagery as I understand it. While it indeed points to something specific within the authors current context, it is written in such a way that we, as well as preceding and successive generations, can apply the same symbolic framework to anything that fits the description. The point is that we can say, "sure, Rome was a beast... but so is America... and so is the bully on the junior high school campus." The point is that in the book of Revelation we have a narrative which provides us with footing for our own confrontation with the powers of sin and death. We have a lens through which we have eschatological vision of what lies behind the scenes of our own systemic and domestic injustices. Indeed, we are even given a narrative by which we can find ourselves in solidarity with the oppressed in our own current crisis. Oh no. Revelation is not about past events, it is about right now!

Really love your perspective on this, Wes. Also, would a Preterist view imply that the new Heavens and new Earth and new Jerusalem in Revelation have already happened? That seems rather unlikely to me. It seems a Preterist view would also be one in which a universalist position would become more tenable by virtue of the "smoke of their torment rising to the ages of the ages" already having occurred. Even your view that the imagery has something to say about the present and the future significantly weakens the traditional view of hell as based on Revelation. At least it seems that way to me. Of course, I already think that view of hell is quite weak.

How did this comment become about hell? Guess I've been kinda preoccupied with hell lately. :)

Joshua,
I can't speak for all preterists, but as for me, the New Heavens and New Earth imagery speaks of the present and the future. It provides us a lens through which to see the beauty of this world as it should be, underneath the dust of death and curse. But it speaks prophetically as well. Knowing this image to be how it ought to be, we can certainly see that we aren't there yet. And it signals the climactic and dramatic intrusion of God's kingdom into this world. To me, it is an example of the now, but especially of the not yet.

As for hell, there's still a strong biblical argument for the legitimacy of an eternal hell... even in a preterists view... because of the "lake of fire" imagery and it's eternal quality. It's tough to get around, in fact. But in apocalyptic literature as well as prophetic literature, hyperbolic language is common. Even with hyperbole, however, you can't avoid the sheer clarity of the 21st chapter of Revelation. The author, through symbolic and even poetic language, wants to make it readily clear that the new heavens and new earth are fundamentally void of chaos and curse, without the old order, without even a sea from which any beast could potentially emerge. This is eternal without question. So the question is, are individuals included in the passing away of the old order? It is here that there is room for discussion and it is here that we can hold the Revelation accountable to the rest of the biblical narrative.