thoughts on church as we know it 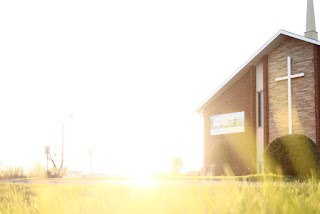 I spent the last two days at the Sticky Teams 2.0 conference at North Coast Church in Vista, California. I gleaned some helpful nuggets of information and got to spend some time with some awesome people. I always find it interesting to be in a room filled with pastors. There were around 750 pastors there, I'm told, and that means a whole lot of influence if you think about the churches they represent. Every time I am in a place like that it gets me thinking about the church as a whole. I get to wondering if this is really what church should look like--a bunch of comfortable, white, male pastors (generally speaking) taking notes on how to make their churches grow and listening to guys with huge churches. It makes me wonder...

Well, I wasn't the only one who experienced some internal conflict. On the way home, my good friend who was with me at the conference brought up some questions about the church. I think he was inspired by the same conflict. We nerded out for a good half-hour (thanks to traffic), going back and forth on what's wrong and right about the church as we know it. I found myself making some very strong statements--some with the implication that we should stop with the gatherings and worship services if we're not doing it among the poor, we should quit buying property and building buildings because as soon as we "get practical" about the church we've lost our sight of it... after all, the early church didn't think about those things until they realized that Jesus wasn't gonna be right back. What are the indicators of the church as it should be? Well, selling all your possessions and giving it to the poor. Living in community where sufferings and celebrations are truly shared in the fullest sense. Being counter-cultural, counter-consumeristic, counter-nationalistic, etc.

I don't think I really mean all that... after all, I'm not doing any of it.

I don't really think that white suburban churches and mainstream evangelical church models are anti-ecclesiological, even if I'm tempted to say so. But that doesn't mean that there's not something wrong. Perhaps it's not that we should quit with the church as we know it, it's not that the mainstream and the large-scale are counterfeit. We can be just as fake in our liturgy (our action as the church) in the small scale and the "underground" as we are in the big and glamorous. Indeed, we can even be authentic in those spaces. It's not so much that we need to purge something (although we probably do), it's that something is missing.

I thoroughly believe that the church should look like Jesus. Not because I've experienced it but because I hope that it can be. This is the eschatological hope of the church, it is the image of God in the world and the Body of Christ. We might say that it's impossible to be like Jesus in every way, but that would be an eschatological miscalculation. As Francis Chan says, just look at Jesus and do what he does.

So what's missing from the church? Perhaps most profoundly, our solidarity with the poor. Christ shared not only his food, not only his friendship, but his very identity with the "least of these." We've failed at welcoming, let alone sharing identity with the poor. Our churches, especially ones like the one I was hanging out at for the past two days, are extremely marketed to upper-middle class America. They look like shopping malls and museums. Our churches won't even vote to get health care for the poor, let alone consider genuine solidarity. We've got a long way to go before we look anything like Jesus in this regard. Our implicit message has overshadowed our explicit one. We don't even hear the words from scripture about possessions and consumption... they've been drowned out by the flashy speakers and big-screen venues with fountains in the courtyards (I guess we might need to purge a few things after all). We've becomes too preoccupied with "changing lives" to stop and look at what we're changing them into...

Steve,
Oh, yeah! Definitely echoes some other great minds, not least Jon Sobrino. It's one thing to try to resolve this issue with another program or a mission trip (which has been my way of helping the Church, particularly the students, find Christ in the poor), and many churches have progressed well in fining Christ in the poor. But what are we doing to help the poor find Christ in the Church? I'm afraid there's a long, long way to go for most of the church in America.

The American church is dominated by the evangelicals who have aligned themselves with the Republicans in forming the religious right. What more needs to be said? The American church has aligned themselves AGAINST the poor and with the likes of rich men such as David Koch and Don Massey and Rupert Murdoch. The American church has aligned themselves AGAINST the poor by supporting Republicans who want to decimate social programs and return us to a pre-New Deal age. And the church has sold out its soul in this way for what.... the chance at legislating against abortion, homosexuality, gun control, and multiculturalism? And then what do we do when then poor come to us? We cast an evil eye on them and take great pains to make sure they aren't "just bumming" or trying to scam us. And even if they aren't we assume they are lazy or have some character defect.
God help us!

David T.,
Thanks for your comments. You've identified a problem but I don't think it is quite as extreme as you put it. If you walk into most evangelical churches, I think you'll find a bit more balance than that. There is a movement within the church to distance itself from the religious right. I think we've still got somewhat of a hangover from those days when the religious right actually did dominate evangelicalism. The extreme conservativism you describe only represents a tiny minority of the Church. Don't let them speak for the rest of us.

That being said, we have still got a long way to go.