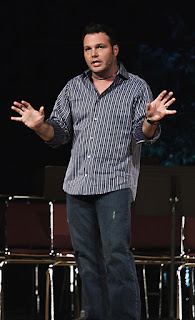 Yesterday I attended the first Day of Sticky Teams 2.0 at North Coast Church in Vista. The highlight of the day, for better or worse, was hearing from Pastor Mark Driscoll of Mars Hill Church in Washington (not to be confused for Rob Bell's church in Grand Rapids). He was just as flippant and matter-of-fact as I had expected and yet, as also to be expected, I had significant disagreements with what he had to say.
The main substance of his message was that there are three different kinds of leaders; Prophets, Priests, and Kings (no surprises at the gender exclusivity here). Prophets are those who "protect the gates" and are concerned about the message of the Church, specifically its' theology and doctrine (a word that Driscoll uses all too casually). These are the theology nerds among us--the thinkers for the church, those who love books and discussion and, apparently, shooting anyone who disagrees with them. I wanted to put myself in the prophets camp. After all, I love theology and I love theological discussion and I pride myself in being relatively well read therein... for what it's worth, I even have a degree in the subject... but by Driscoll's calculation, I don't like the right theology to be considered a priest. He had a very narrow view on the books and traditions from which we should draw and, frankly, I don't care for Wayne Grudem. And I don't feel the need to attack the people with whom I disagree with. So, I guess I should have picked a different major.
Priests, are the loving types, the ones who care about God's people and the ones who are community and relationship driven. Kings are the administrators of the church, the ones who find effective and practical ways of making the reality of the church--it's work and it's message--effected within the world. Apparently, kings have to love charts and graphs and they're really into building projects.
His message was that we need to know who we are and we need to balance our leadership according to these criteria. We cannot allow one form of leadership to dominate another.
What Driscoll was really getting at were the krygmatic, koinonia, and the liturgical/sacramental elements of the church. Nothing new, of course, except for his explanations of them which I found to be short of the mark, inadequate, and extremely narrow (leaving out Progressive, "emergent" and mainline leaders... which is pretty much most of the Church). But those three elements of the church should be balanced, perhaps especially among the staff of the local church. So there was definitely some posetive takeaway.
It was interesting to finally be in the same room as Mark Driscoll. He certainly lived up to expectation.
Posted by wellis68 at 10/25/2011 09:26:00 AM

LOL, Wes, yeah, Driscoll can be a bit much at times. I would be really interested in knowing more about your theological perspective sometime. I'm in a time of some pretty intense rethinking of what it means for me to be a follower of Jesus. I'm kinda fixated on the issue of hell and eternal torment and all right now, but I would love to hear about books, people and ideas that have influenced your theology generally.

I'm so glad you're rethinking things... so am I and I hope I never stop. Theology is, by nature, something that must be continuously rethought and rediscovered. It is "the proclamation of God's ministry" (Andrew Root) and thus it is inherently contextual.

Some authors who have helped me in my rethinking and processing include N.T. Wright, Dallas Willard (Divine Conspiracy), Rob Bell, Brian McLaren, William Cavanaugh, Stanley Hauerwas, and Stanley Grenz. The list goes on but those are some of the key players in my theological development. It is really difficult to say who my biggest influences are but these are some of them.

I have appreciated the thoughts of those who fit within the "emerging church," though I am not entirely one of them. They have demonstrated a balance of openness and theological discipline that is inspiring, even if I don't agree with everything they say (thinking of Doug Pagitt and Tony Jones). I try to keep a similar balance and I try not to rush to any conclusions. I make it a priority to listen to folks from all over the theological spectrum. Recently I was reading Marcus Borg and Francis Chan side-by-side. I read John Piper and J.D. Crossan.

The two sources I go back to most often are probably N.T. Wright, especially his book "The Challenge of Jesus," and Rob Bell just because I think he's got a great perspective and he's thorough in his thought process.

Hope that helps... probably a much wordier answer than you were looking for :-)

Thanks, that was a great answer. I went to Bob Jones University and was thus exposed to the Fundamentalist side of Christianity and otherwise have heard mainly the Evangelical side of the story. A few years ago I would never have thought I'd be pondering ideas like universal reconciliation with an eye towards judging their truth or falsity. They were patently false, end of story. But my mind and, more importantly, my heart have been gradually opening in the last couple of years.

It seems a lot of Christians don't want to deal honestly with some of my questions about God, such as, why did he kill all those people back in the Old Testament? Is the God of mercy and grace and forgiveness also the God of genocide? And why would God create human beings and call them good and then predestine them to eternal torment?

I used to think very much in the Reformed tradition, pondering the Doctrines of Grace and such. Now Calvinistic ideas are starting to look more like the destroyers of my peace rather than the bringers of it.

I'm also a big fan of N. T. Wright, although I've only read Surprised by Hope. I just finished reading Jackson Baer's What The Hell book. It was pretty good but still leaves me with quite a few questions, so I'm doing more reading on the subject.

One thought I've had is which seems more like the God I want to know, a God who would condemn his enemies to everlasting torment or a God who loves his enemies? If Jesus tells us to love our enemies but then condemns his enemies, how can he be trusted? Just some questions I'm pondering.

Honestly, I think a lot of people just haven't adequately pondered the question of Hell. If we really thought through its implications I don't think we'd be so eager to embrace the idea as many seem to be despite their protestations.

Anyway, I really enjoy reading your blog because you seem to think a lot like me, and because you are showing me there is a way forward that embraces hope.