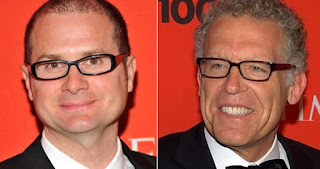 It seems that the rumors are true. Rob Bell--the public theologian, pastor, and author of Velvet Elvis and Love Wins--is relocating from Grand Rapids to Los Angeles to produce a new television show called "Stronger" with Carlton Cuse, executive producer and screenwriter of "Lost." The show is a story about a young musician who ends up becoming something of a "spiritual guide." If it's got any Rob Bell to it at all, it will surely be a drama which raises deep spiritual questions and offers profoundly good news amidst the pain and struggles of its characters. Perhaps the authenticity and creativity of Rob Bell is just what the genre of "spiritual drama" needed.

But more than this, I think that this show may be just what we needed.

Recently, for some strange reason, I found myself up late at night flipping channels, watching "Christian" television networks. I flipped from one older white Pastor standing on a stage in a suite telling me something about how God "himself" wrote the Bible, to another older white Pastor standing on a stage in a suite telling me that if I am not called to tell people about their "sin" then I'm not called or chosen by God at all. Then I changed the channel and listened to a man with a lazy eye telling me about the horrors of Jesus' return--the immanence of World War III, the "evils" of the eventual peace treaty to be signed by Palestinians and Israelis, the terror of tolerance among various religions--it all sounded so utterly hopeless. Then I thought back to shows like "Seventh Heaven" and "Touched by an Angel" and I thought to myself, "Christianity is just stupid. People who believe this crap and live those fake lives are supposed to be Christians?!" Whenever Christianity finds its' way to the big screen or the living room, it gives us all a bad name.

We're all familiar with Televangelism. It has become the typology for hypocrisy, often even among people who don't call themselves Christians. It's a big dupe-session; a guy talks about love and justice and healing and then happily steals your money. It's a very bad story! But someone has got to tell a good story, an honest story. The Church should be the pioneers of creativity and authenticity and we've for far too long told a fake story that's utterly disconnected. What we need is a good story.

What's the best way to share your faith? On accident!

Faith is shared when it's shared honestly, when it's a transparent story that internalizes the realities of pain and need while celebrating the hope for something more. Evangelism--sharing good news, sharing faith--is about sharing yourself, it's about being so transformed by the gospel of Jesus that you cannot help but share it... it just happens... it happens on accident. For so long, then, televangelism has been an oxymoron. We get up, tell a fake story from a fake platform and call it sharing good news when all we should be sharing is the honesty and creativity of our lives.

Rob Bell, if he's nothing else, is a good story teller. And he's authentically creative. I think, if nothing else, we have lots of room to hope that Rob Bell will tell a good story. We have room to hope that his faith will be shared and that the story, though fictional, will be utterly real. It will, if all goes well, become the new face of "Televangelism"--faith shared as authentically as possible through the medium of television--though we'd be mistaken ever to call it that. I think that it'll just happen on accident.
Posted by wellis68 at 10/04/2011 12:57:00 PM

Email ThisBlogThis!Share to TwitterShare to FacebookShare to Pinterest
Labels: RobBell

Interesting news, Wes! I agree with your take on "Christian" media; too often, the trite or mediocre is given a pass because it's supposedly Christian.

One you didn't mention, however, is Joan of Arcadia, which received some critical praise both religious and secular and whose theme song was "What if God was one of us?"

Good point Steve,
I never saw Joan of Arcadia. I'll check it out. Thanks :)

So is he not part of mars hill anymore?

No. He's relocating to L.A. I'm pretty sure Shane Hipps will be doing most of the pastoral work at Mars Hill. He kinda already has been.