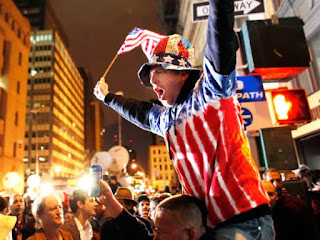 Perhaps it has taken me about this long to process what happened back on May 1, 2011 or maybe it's just a delayed reaction, but recently I have been reflecting heavily on the death of Osama Bin Laden.

I heard about it from one of my students. We were at Youth Group, getting ready to begin our study, and one of my students raised up his cell phone and announced, "my dad just texted me... we killed Osama Bin Laden." I remember just sitting in my chair in the front of the room, unsure how to react, feeling an unexpected sense of grief, and just listening as students reacted to the news. The overall consensus was that this was positive news, there was an air of celebration. But I just could not share the sentiment. I was much too conflicted for that. I don't remember exactly what I said to my students but I do remember taking the rest of that night to talk about what Jesus meant when he said "love your enemies." I didn't shoot down anyone's reaction, but I did challenge the students to allow themselves to be conflicted. The news of someone's death, if we love them, should not invoke celebration but grief. But on the other hand, how could they help but feel a sense of pride and relief. This man, Bin Laden, had been the face of evil for them for their entire lives.

When I went home, I watched the news and read through my Twitter, just to see how people reacted. Many celebrated, few mourned. I wasn't sure why, but I was overwhelmed with sadness. I was sad to see so many Americans so quickly dismiss the humanity of another person. And I didn't know why else I was sad until much more recently. I realized that for my entire adult life, ever since I began to pray for those who persecute, as Jesus taught me, I had been praying for this Osama Bin Laden. I didn't know him, I didn't know any more about him than what I was exposed to through the media, but I had been praying for him. The Arab world and the West, especially the U.S., are in such need of reconciliation and healing. Bin Laden became--ever since I was 16 years old--the face of that conflict and thus, quite often, the face I pictured when I prayed for reconciliation, when I prayed for my enemies. I was not praying that U.S. special forces would end his life. I was not praying that he'd be quickly buried at the bottom of the sea. I was praying for a miracle. I was praying for peace, restoration, and understanding.

I was sad that night because the man for whom I'd be praying, the man in whom I'd desperately sought to affirm humanity, had been killed and thus my prayers were wasted. I mourned because the future I'd hoped for, the future for which Jesus had taught me to pray, was no longer a possibility. The humanity which I'd tried so hard to see in this man--despite whatever atrocities for which he was responsible--had been snuffed out. The failure of my prayers had become the object of celebration for an entire nation. That is what I was feeling in my soul.

Did he deserve what he got? Perhaps. Did his death prevent the death and suffering of many others? It's possible, though we can only speculate. But the bigger question is, did God love him? If God loved him, then should we have loved him? If we should have loved him, did we? Does love celebrate the demise of its' object?

I had hoped for so much more. I had hoped for healing. I mourned because in the "victory" of the United States, it seemed that love had failed... My faith and my hope were abruptly called into question.

Things would have been more simple if I had not been praying for my enemies and trying to love the unlovable. I may have been able to simply celebrate the death of an evil man. But Jesus messes things up for me on a regular basis.
Posted by wellis68 at 9/27/2011 12:44:00 PM