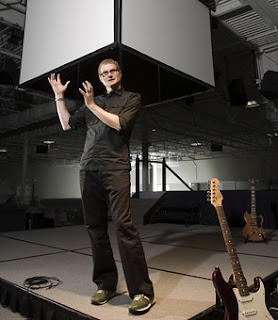 I had an interesting conversation with a couple of my students last night at Youth Group. We were spending the first 45minutes of our gathering stuffing Easter eggs with candy for the Sunday School program so they could hide them for the annual Palm Sunday Easter Egg Hunt. I guess that's just the context to have a conversation about Rob Bell, the emerging church, and homosexuality...

One of my students, we'll call her Emily, is the Christian Club president at her high school and she was confused about something she'd talked about with her leadership group. They were talking about what to program for the remainder of the school year and apparently there were a few members who'd suggested watching Noomas each week or at least regularly until the school year was over. An easy solution, right? At least Emily thought it sounded like a good enough proposal--Noomas make it easy for anybody to lead a discussion, not as many guest speakers required. But Emily was surprised to discover that the proposal was not as appealing to her fellow leaders as it was to her. The other leaders of the group wanted to veto the decision on the grounds that Rob Bell is part of the infamous "Emerging Church"... [insert disdainful groan here] and didn't talk about the resurrection (I beg to differ).

See, all Emily had known prior to this was that her Youth Pastor (me) is a Rob Bell fan and happens to show Noomas pretty regularly to the Youth Group at their regular gatherings. She didn't know what the "Emerging Church" was or why it should be feared or avoided. She just knew that Bell made her think and, through the ministry of Nooma, played a part in the nourishment of her faith.

So, after some research on the Emerging Church, finding mostly the opinions of its' opposition, she found herself really intreagued and drawn to the emerging church, even though the information she was reading was meant to warn her against it (I'm tempted to take some credit for my students' ability to think for themselves). So she had to ask me about it...

"One of the first places to start in defining the emerging church is to say that it's undefined."

She looked puzzled... But we went on while several others listened in. I described what I knew about the movement and even went as far as to express some of my sympathies to the movement. I explained Rob Bell's unofficial and alleged affiliation therein, which lead into some discussion about Love Wins, which subsequently lead into a discussion on the Emerging Church's habit of questioning some traditional doctrines, which eventually lead all the way to a discussion on homosexulity in the Church and in Scripture... whew, and I expected light conversation over stuffing Easter Eggs. I think I did well not to lead anyone "astray." I simply suggested some starting points for wrestling through these issues.

...And all this before even getting into our continued study through the Book of Revelation...
Well, I've wondered before if the generation I'm working with will ever even hear about the Emerging Church. I've wondered if their affect would be something of a fad which might subtly steer some conversations and then drift away in the wind. But it seems that the discussion is a little closer to the ground than I had thought.
Posted by wellis68 at 4/11/2011 08:40:00 PM