1 Once Jesus was in a certain place praying. As he finished, one of his disciples came to him and said, “Lord, teach us to pray, just as John taught his disciples.”

2 Jesus said, “This is how you should pray:

“Father, may your name be kept holy.
May your Kingdom come soon.
3 Give us each day the food we need,
4 and forgive us our sins,
as we forgive those who sin against us.
And don’t let us yield to temptation.”

5 Then, teaching them more about prayer, he used this story: “Suppose you went to 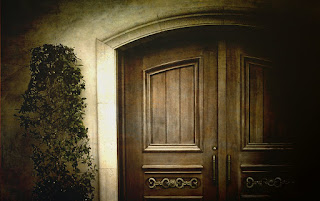 a friend’s house at midnight, wanting to borrow three loaves of bread. You say to him, 6 ‘A friend of mine has just arrived for a visit, and I have nothing for him to eat.’ 7 And suppose he calls out from his bedroom, ‘Don’t bother me. The door is locked for the night, and my family and I are all in bed. I can’t help you.’ 8 But I tell you this—though he won’t do it for friendship’s sake, if you keep knocking long enough, he will get up and give you whatever you need because of your shameless persistence.


I got a phone call this morning. Someone was confused as to how they should interpret this passage of Scripture (the one in Luke 11:1-13)--specifically the part about the man who says "don't bother me..." but ends up giving the food anyway (vv. 7-8). They assumed that I'd know what to make of it. That's a big assumption but as we wrestled with the text together over the phone some wonderful things began to come to light.

Our confusion was in the fact that the man said no but ended up doing it anyway. It's actually a lot more confusing in some other translations. The NIV says "even though he will not get up and give you the bread because of friendship, yet because of your shameless audacity he will surely get up and give you as much as you need." Somewhat confusing huh? Even though he says "won't," he does. In light of the "Lord's prayer" right before this, are we to think that God just "won't" but does anyway, as though God would rather not bring God's kingdom but we annoy God into submission? I don't think it's God's mind that actually needs the changing. I don't think it's God who just "won't." There's a wonderful couple of words in there that I think are key to understanding the passage. The words are "shameless persistence" or, in the NIV, "shameless audacity." Shameless persistence, you see, is probably the most accurate antonym of cynicism. We usually think that optimism or hopefulness are the opposite of cynicism. But I would contend that "Shameless persistence" and "audacity" is even more opposed to cynicism than optimism or hope. It's not just the hope that something good will happen (hopefulness) nor is it the mere expectation of good things (optimism) which borders on naivete. It's the relentless pursuit, the shameless persistence, toward an odd request; that generosity and love will be shown where it hasn't ever been shown, even in the midnight of the world.
The "Lord's prayer" (shouldn't it be called "Our" prayer?) is the anti-cynicism prayer. It requests, against all odds, when it's midnight and hope sleeps behind locked doors, that God's reign might actually come--the reign in which the hungry are fed, the debt of the world is canceled, forgiveness wins out, and temptation toward anything less is averted. It cries out, in a world without a voice where all roads seem to be leading toward destruction, for God's love to overcome the grave. You see, it's not God saying "don't bother me"... it's us. And it's through the audacity of the Church which trusts God's imagination that we can replace such cynicism with redemption. The reign of God doesn't come just through a superficial "friendship" with God, where we can sit back and just float into heaven, but through people who are persistent enough to re-tune their hearts and their minds here and now, through disciplined prayer and steadfast resistance, to the heart and mind of the God who has defeated death.

The Church are the people of shameless audacity and shameless persistence, who work in the light of love even when it's dark outside, who refuse to buy into the imagination of the world, who refuse to believe that some should starve to death all alone. Too often, however, the church (especially the wealthy church and the church in America) becomes the people of fearful "realism" and shameful caution... just look at the way we budget. We're afraid to keep asking for the Kingdom because we're afraid we might lose friends. We're afraid to be audacious because we're not sure that we believe that God's is the power and the glory forever. But imagine for just a moment... what might happen if we became really and truly shameless in our persistence toward the Kingdom of God... imagine... then be persistent.
Posted by wellis68 at 2/16/2011 05:59:00 PM