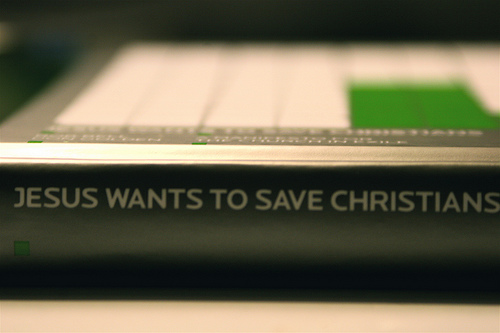 This Sunday, we're having a meeting for anyone who's interested in going on our Mission Trip (hopefully in July) to Los Angeles. It'll be the first "Mission Trip" in our Youth Ministry's history (to my knowledge) and I'm greatly looking forward to it!

This is not just going to be a one week experience for these students. It's going to be a year 'round season of growth and reflection. We're going to take six months to prepare as a group and six months to debrief. Part of the preparation will be reading selected chapters from some books to help guide our reflection and get us mentally ready to engage in issues of poverty and oppression. Some of the authors include Tony Campolo, Shane Claiborne, Ron Sider, Rob Bell, and Zach Hunter... yeah, I'm pretty much making them read my favorites.

Today, as I was looking over some of the readings, I re-read a chapter from Rob Bell & Don Golden's book Jesus Wants to Save Christians. It's the chapter entitled "Swollen Bellied Black Babies, Soccer Moms on Prozac, And the Mark of the Beast"--perhaps the best chapter title in history--and I plan on having the students read it during the month dedicated to thinking about poverty in America and America & poverty. Wow! I forgot just how good that chapter and that whole book really are! I expect it to be very challenging to some of our students and I expect some of them won't even like it. But I think it's important for us to embrace our identity in Christ in contrast to the American "Empire" identity, which seems to be the overall objective of the chapter. Unless we break ourselves out of the shell of American identity; defined by power, accumulation of wealth, military might, self preservation, entitlement and prosperity and into the unique truth about us which is that we are created in the image of a God who shares God's identity with the weak, the poor, the abandoned, and all the "least of these," we will be hard pressed to identify with the poor--perhaps especially the poor in our own country--in any authentic way. If we cannot place our identity in the Dominion of God (the Kingdom) then our expectations of the poor will always outweigh our love for them. American identity makes us tragically immune to the suffering of others. As Rob & Don put it, "If the system works for you, it can be quite hard to understand the perspective of people who have the boot of the system on their neck. If you have the power, it can be hard to understand the voice of those who have no power" (p.130)

Although I know that no selective quotations can fully reflect the brilliance of this chapter as a whole, let me give you a few of my favorites:


"America is an empire. And the Bible has a lot to say about empires . Most of the Bible is a history told by people living in lands occupied by conquering superpowers. It's a book written from the underside of power. It's an oppression narrative. The majority of the Bible was written by a minority people living under the rule and reign of massive, mighty empires, from Egypt to the Asyrian Empire to the Roman Empire. This can make the Bible a very difficult book to understand if you are reading it as a citizen of the most powerful empire the world has ever seen. Without careful study and reflection, and humility, it may even be possible to miss central themes of the Scriptures" (p. 121).

"Excess can become normal. And it can be very easy to lose perspective on just how much we have. One leader of the American government announced that 'the American lifestyle is not up for negotiation.' This can sound like a perfectly rational thing to say. It may even sound quite impressive to some, as in, 'we won't let anyone push us around.' Statements like this can even get a person elected. Because, after all, 'we've worked hard and we deserve what we've earned.'... Imagine hearing this as one of the three billion people on the planet who survive on two dollars a day" (p.125).

"When it's written in the Psalms that some trust in chariots and some trust in God, this is a statement about empire and power. It's a contrast between two different ways of being in the world" (p.128)


And there are too many other good ones to share them all. I am really looking forward to reflecting on this chapter with my students!
Posted by wellis68 at 1/05/2011 12:00:00 PM

wow, Wes! what an amazing highlight of that chapter and super excited about what sounds like will be a great experience for you and your students in preparation for the trip. I was really blessed by the reminder of what perspective the Bible was written from, needed to hear that today. blessings, thanks for sharing!

Wes, our church will be reading Bell's book altogether during January and February, with some opportunities for group discussion (including on our Facebook page!). Thanks again for introducing me to Bell and other emergents! And best wishes for your mission trip.

That's awesome Steve! That's gotta be my favorite Bell book... but he's got another one coming out, ya know.