An Open Letter to Mark Matlock 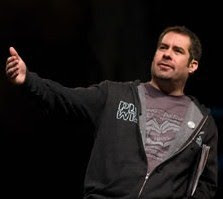 Usually when you find "an open letter" to someone, it leans toward criticism and negativity. Well, this doesn't. I have a huge respect for Mark and the following letter is really just me voicing the way he's been a part of my spiritual life (a much bigger part than I usually consider) and just a few of my ideas and questions about some things he suggested yesterday at the Youth Specialties Conference in San Diego. Mark gave one of the most moving messages that I've heard in some time. He talked about his renewed dedication to youth ministry and he talked about the great need for more people to dedicate themselves to ministering to teenagers. Even though I'm sure there are differences between us in our approach to theology and scripture, Mark has sort of followed me in my faith journey... even though we've only met once or twice and I'm sure he wouldn't remember me. I don't actually expect Mark to read this. Again, this is just me responding to what he said.


Dear Mark Matlock,
Back in 2001 or 2002 I went to one of the Planet Wisdom Conferences in Orange County as a student. It was at this conference that I first felt a call to youth ministry. You gave students an opportunity--something of an alter call--to respond to the Holy Spirit and to dedicate their lives to Christ, rededicate their lives to Christ, or (and I'm not sure how often you do this) to come to the front if they felt God calling them to vocational ministry. Well, the first two didn't do anything for me. I'd already been a leader in my youth group and I didn't feel any need to shift directions. But the third option caught me off guard. Vocational ministry? Was this something I felt God calling me to do for the rest of my life? With trembling hands I walked to the front and since then I've been pursuing a life in local church ministry. I went to Azusa Pacific University to study Youth Ministry (but ended up changing majors to Theology and Biblical Studies) and now I'm the Director of Student Ministries at my Church in Ramona, California. I somewhat forgot that experience at Planet Wisdom but I still followed the call.
Well, over the last few years I have basically been thinking that after five or six years in youth ministry it'll be time for me to move on and do something creative in "Senior" pastoral ministry. I'm a seminary student and I've been stumped as to where I really see myself going in this.
But Mark, you did it again. As you spoke yesterday I looked around me at all those in the room who were dedicated to students. Your words began to give greater meaning to my work. The work of those around me began to give meaning to my work. I realized that I needed them. We need each other. My love for students is somehow fulfilled in their love for students and vice versa. So there in my seat, as you urged that we need more people to pour into the lives of students if there is going to be a future for youth ministry, I began to pray. I began to wonder a little bit and I began to feel the things you were saying. I felt afresh God's invitation to be fully committed to youth ministry in both the present and the future. I guess you could say that I rededicated my life to youth ministry. I opened myself again to the call. I think I can say with you that "I'm back in the game." I still don't know exactly where my ministry journey will take me but I am dedicated, in whatever capacity, to the lives of students.
But here's my question. Are churches really prepared for more leaders? I know we need more people, but would we know what to do with them? Most churches have youth pastors who've only been in the game for a couple of years or so. Are they really equipped to prepare leaders to engage for the long haul? We all know how good churches are at burning people out. How much easier is it to burn out people who are fairly uneducated about youth ministry?
As you said, we are the most educated and well-resourced generation of youth workers in history. But in actuality, it's really only the paid youth workers who are receiving those resources. It's only those who feel called to vocational ministry who are getting degrees in youth ministry. It's only those who can dole out $300 that are going to the Youth Specialties Conference. So don't we need better training for those who are willing but not equipped?
What if veteran youth workers all over the country... you know, the guys who are writing books and leading huge leadership teams... what if folks like that began training volunteers? What if people were to donate their time (or do it for very cheap) all over the country to offer classes and courses to which an average local church could afford to send their leadership team, where they could learn the foundations of youth ministry?
We need more people but we also need to be serious about equipping them for the long haul if we expect to keep getting new people.
Mark, thank you for the role you've played in my life. Thank you for being a living encouragement to folks like me. And thank you for your heart for students.
Sincerely,
Wes

P.S.... We'll see you at Planet Wisdom this April!

Yes I agree, mostly open letters are filled with negative content ! But, this letter was awesome!