I Need To Learn Her Name 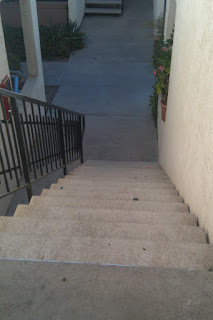 Most mornings at our apartment you can hear yelling and banging sounds coming from the apartment below us. It is and has been quite obvious that the home is in desperate need of peace and that things are just not right down there. They are obviously hanging by a string financially and they're hanging by an even thinner string emotionally as a family. My wife if often frightened by the sounds of the three boys fighting and the mother screaming at them. And most mornings we sorta sneak out and hurry to our car so as not to intrude on their issues. We have been remarkably successful at being unobtrusive... we've never even offered a helping hand.

Well this past Sunday morning was different. Amanda had already gone off to set up for Sunday School and as I lay in my bed, soaking up a few extra minutes of beauty sleep, I could hear the familiar sounds of fighting beneath us and they were as loud and as frightening as ever. Still, I went about my morning. I put on my deodorant, I buttoned up my shirt, I stuck on my fancy "Youth Director" name tag, and I headed off to church. But before I made it down the stairs I heard the woman come out from the apartment below us. For the quick second that the door was open the sounds of the fighting were piercing--a slam against the wall, a fist against another's skin. I continued to walk as I heard the woman cry "Jesus!"... and I don't think she was praying. Still I walked on, in a hurry to get to church, and she began to yell in my direction.

By now I was past her and headed toward the street. In tears she yelled out, "you are the worst neighbors!" Now, she wasn't just talking to me, she was also yelling to the man in the corner apartment who was simply sitting on his porch listening to the fighting. And as she continued, it was obvious that her cries were meant for all the neighbors around us.

"I'm a single mother with three boys and you can't even lift a finger to help me!" She looked at the man sitting on his porch. "YOU! All you can do is sit here and call the cops on me!" Apparently, days prior, the cops had showed up at her apartment to deal with the situation and I'm sure they did more harm than good, as police tend to do in these situations. She only assumed it was he who had made the call. "AND YOU!!!" She looked me in the eyes, as I froze in my tracks. "You... you're a 'preacher' and you can't even come over and help... you can't offer my boys some words of encouragement!!?"

She rose her eyes to the sky and yelled, "GOD DAMN YOU!!!"

I walked toward her, hoping for some tangible invitation to come in and do something but, the truth is, I had no idea what I could do. As I walked toward her she walked away from me and went back inside. After a short and stunned conversation with the man in the corner apartment, the content of which I can hardly remember, the woman came back out and I said to her some weak words like, "I want to help if I can but I don't know how."

As she went back inside I began to walk again to church. I couldn't do any more, you see, because I was late for worship... how ironic!

I had not been a good neighbor. I knew that things were not right in her home. But even if I had not known, I was without excuse. I live right on top of her and I didn't even know her name. I had never been to her front door. I never took the time to get to know her.

Now, of course, I would be justified in placing the blame on my distorted culture in which one person pays a certain amount of money to live in their allotted space, another pays to live in theirs, and never the twain shall meet. But the truth is, she called me on my sin and she hit the nail on the head. In her need, no matter what excuse I'd like to defer to, I was absent... the church was absent... God was absent.

I was a bad neighbor and I felt that my long walk to church was a demonstration of that. I was on my way to a church where we speak of and worship a God who cares; who takes the time to get to know us; who showed us, through the particular life of a man from Nazareth, that being a neighbor means touching, helping, offering time, sacrificing for the other on their terms. I was on my way to this church to draw near to this God but in reality, as I walked from my apartment to church, I was fleeing Him. The God revealed in Jesus Christ was surely more present that day in the midst of my neighbor's suffering than in the confines of four walls with a steeple.

Of course the whole sermon had to be about "being for the other," about being present in the midst of suffering--about becoming people who walk toward, not away from the suffering of others. Of course we sang about drawing near to God. Of course I felt every word pierce my heart as if to say, "you shouldn't be here."

So the time had passed, there was nothing I could do in any immediate fashion. So I had a choice of either internalizing and burying my guilt or confessing it and receiving forgiveness so that I would be free and ready to redeem the situation. So, naturally, I used the kids.

Since I was teaching Youth Sunday School (grades 7-12) and I had a captive audience, I threw out my curriculum for the day and sought simply to let my life be my curriculum. I took the opportunity to tell the story to the group. I wanted to see what their reaction was so that, somehow, in correcting and learning from their responses, I could correct and learn from myself. Of course, after I had confessed my story to the students, all sorts of ideas started getting thrown around. Before anyone even had a chance to let the pain of the story settle in, everyone was trying to "fix" the problem--"can we send her a basket of things she might need?" "Can we invite her kids to Youth Group?" In a way, the students' responses reflected the very heart of the problem. You see, for us, we have created a pattern of distance. Even in our response to the needs of others we protect ourselves and keep our distance. All our relationships with people who are in need are about "fixing" the problem and are rarely about being a good neighbor. They're rarely about getting to know their suffering. They're rarely about learning their name.

Real relationships can't be about fixing the problem. If you don't know them, if you're not a good neighbor to them, then it's to late to fix anything. My wife usually hates it when I try to fix her problems, "just listen" she says. She didn't marry me so I'd fix her problems. She married me so that I could be with her--truly with her--in the midst of them.

As this dawned on me during our Sunday School discussion, I said to the kids, "guys, I think before we do any of that, I need to learn her name. I don't know if we can fix any of her problems and I don't plan on coming back to church next week with a wonderful story about how all we hear from the bottom apartment is 'I love you brother', but I hope I can simply come back with her name. I hope I can simply be a good neighbor to her, even if only for once."

Compassion goes beyond fixing things. Compassion is about presence. We can't fix everybody but there isn't anybody we can't love.

So yesterday morning, as Amanda and I left our apartment to get on with our typically busy day, we saw her sitting on the steps below us. We weren't sure what she was doing, perhaps she was crying. But after we'd passed her on the stairs I turned toward her (and I struggled to turn my whole heart along with my body) and I said to her, "you know, I wanted to tell you that what you said to me the other day was true... we haven't been good neighbors to you... we live right up there and we should be there for you and we haven't been... but the truth is, we don't know how to help... we don't know what we can do, but we should at least be there for you." She looked at me and said, "thank you for saying that" and with a pause she started to apologize with heart breaking words--"you guys pay a lot of money to live up there and you shouldn't have to hear us." I shook my head in disagreement as if to say, "that's wrong." She said, "I just don't know what to do." I responded the only way I knew how, "neither do we, but we'd like to be here for you." And with a pause I said, "I'm Wes... and this is Amanda... what is your name?"...
Posted by wellis68 at 9/22/2010 01:58:00 PM