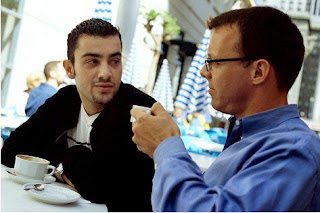 This weekend we had our Men's Retreat where the men of our church went up to Pilgrim Pines camp in Yucaipa, California for some quality time with each other and with God. Our speaker was a really articulate and wonderful man from a much different theological background (namely, the "Jesus Movement" of the 70's and non-denominational evangelicalism) and thus represented a different approach than we would normally take to scriptures and some theological/social issues. It was good for us to be challenged from outside our own tradition and it was simply a good weekend of learning and devotion.

One of the topics that really got me thinking was his discussion on "compromise." Briefly but frequently, the speaker mentioned that we shouldn't "compromise our beliefs" as we act in the public/political sphere and as we share our faith with the world. Each time he said it, each time he passed by the subject, I had to scratch my head and think about just what an uncompromising faith would have to look like in order to continue to be a changing and growing faith (as we would all want it to be).

We talk about not compromising our beliefs and yet the basis of evangelism (the kind that leads to change and/or conversion) is to cause others to compromise theirs. Is that fair? We want to be certain of our beliefs and yet we want others to question theirs. We want others to think like us and yet we don't want their beliefs to influence ours... we want to share our faith but we just don't want to share in terms of mutuality. This doesn't seem fair or logical to me and yet we take it for granted.

Perhaps this has something to do with the economically privileged state of American evangelicalism. When we talk about sharing, as privileged people, we think that means imparting what we have to those who do not have. But sharing, if we take off our privileged lenses, is mutual. Ask anyone who has had the chance to go and serve in a poor community and to share in life with them... the blessing they receive, though unexpected, is often greater than the economic wealth they went there to impart. Sharing must be mutual or else we're missing out on the blessing of growth that is so vital to Christian spirituality.

The only kind of faith that shouldn't be compromised, the only faith that is worth "protecting" is the faith of which openness (not necessarily the same as "compromise") and mutuality are integral parts. Sharing, openness, change, and inclusiveness are indeed integral parts of the Christian faith which affirms that God, the creator, chose (in freedom) to share and experience identity with creation, to take up that which he wanted to save. The Christian faith, as we see in the book of Acts, is a faith that is on the move, a faith which accepts the challenge of opening wider and wider to embrace more and more. While the faith is opened from Jews to gentiles, slaves to free, males to females, the distinctness of Christ is not lost or compromised but it is indeed revealed... "for we are all one in Christ" The kind of faith which opens wider and embraces and learns from more people and more perspectives is the faith that reveals Christ and his Kingdom... uniting, repairing, and healing the world. The Christian faith, faith in Christ, is the kind of faith that never stops changing because it is a faith that is big enough for the challenges and it is a faith in a God who is big enough for our questions. In a way, compromise (the kind which puts the pursuit of truth and spiritual formation in the front seat, and not just mere inclusiveness) is part of Christianity because, in faith, we believe that Christ will win out over compromise. As we unite and share and question, we won't lose Christ but he will indeed be revealed.

If we seek growth, as we should, we will change and we will be open. The kind of faith that grows is not the kind that assumes "certainty" (as we tend to assume privilege when we think of sharing), absolutes, or any rigid concept of "arrival." It is humble faith which involves mutuality. We grow when we are challenged and we are challenged when we consider the arguments of those with whom we disagree.

The starting point of mutual sharing is not merely imparting knowledge to others nor is it pluralistic relativism. Its goal is not the syncratization of all theological perspectives. The starting point is being able to speak with clarity about your own theological perspective/narrative and then "correcting" and challenging the narratives and beliefs of those with whom you disagree. This sounds like fundamentalism to some but this, however, is where many evangelicals and/or/ fundamentalists stop. But it is truly just the start. Once we've made a "correction" and/or a challenge (with humility) to the beliefs of others, the dialogue has only just begun, the response and our response thereto is the important part.

This sharing can go one of two directions. It'll be embraced--"wow, thank you for the challenge, I guess you're right..."-- or it will be countered or rejected. If we have the kind of faith that embraces change, growth, and sharing then we will actually listen to our neighbors response--"well, I disagree and here's why..."--and we'll hold our own perspective in question (without necessarily letting go of it) long enough to take them seriously as a person and to seriously consider how their belief might challenge ours. it may well be that their perspective is simply unconvincing to us and ours may be unconvincing to them but we'll actually seriously consider altering our conclusions so that our faith might grow and so that the good news of Jesus Christ might actually be revealed. Only then is it fair for us to expect others to consider and be changed by our perspective.

To some who mistake questioning faith for weakness rather than strength, this sort of dialogue sounds like compromise. But if we really believe that Christ is truth then we won't worry too much. If it's true then it's safe to think in the same way in which we hope that others might think. If people are going to accept Christ, then they need to be open and we can't hold double-standards. It's not fair to expect others to open their hearts to the gospel without actually opening our hearts to them an their perspectives. If all truth is indeed God's truth then we need to be able to consider the truth in any and everyone's arguments.

What's the difference, then, between sharing and "compromise"? Well, it must be the heart. Sharing seeks to grow in Christ, it seeks positive change. Compromise, on the other hand, only seeks to be inclusive (an ethic which would be otherwise noble). Christ leads us to inclusion but inclusion doesn't necessarily lead to Christ.

So we should feel free to speak clearly and confidently about our faith but we should also be free to question it and be open to others. This is how we grow and this is how the gospel of truth is truly revealed in the life of the church.
Posted by wellis68 at 5/18/2010 01:13:00 PM

hi, you have nice blog.. u can view also mine..http://akoniwares.blogspot.com