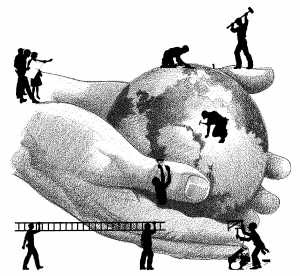 Some people think Christianity is about escaping the world, some people think it's about rejecting the world, and still others might take a different extreme and suppose that it's about assimilating to the world... but perhaps it's got more to do with healing the world; mending or "repairing the world." For some, faith in Christ is about individual spirituality, having a "personal relationship with Christ," a salvation which is placed primarily outside of history, and/or waiting for Jesus to return. But if it's actually abut healing the world and not rejecting, escaping, or evacuating it then it's about "communal betterment" and a holistic and historical salvation. Some might call it a social gospel, but as Desmond Tutu once said

"I don't preach a social gospel; I preach the Gospel, period. The gospel of our Lord Jesus Christ is concerned for the whole person. When people were hungry, Jesus didn't say, 'Now is that political or social?' He said, 'I feed you.' Because the good news to a hungry person is bread.”

There's a passage in Jeremiah, a famous passage, in chapter 29. God, through his prophet, is preparing the people for exile in Babylon (an image which the author of Revelation likes to use as a metaphor for contemporary circumstances)--not the best or most encouraging of times--but he encourages them with these words:

"Build houses and settle down; plant gardens and eat what they produce. Marry and have sons and daughters; find wives for your sons and give your daughters in marriage, so that they too may have sons and daughters. Increase in number there; do not decrease. Also, seek the peace and prosperity of the city to which I have carried you into exile. Pray to the LORD for it, because if it prospers, you too will prosper...Do not let the prophets and diviners among you deceive you. Do not listen to the dreams you encourage them to have."

Is this not somewhat surprising? God doesn't tell them to revolt against Babylon, even though in the following verses it is made clear that he wants them to keep their unique identity (think of "in the world but not of the world"), and God doesn't call for resistance beyond the rejection of "prophets and diviners." God's call is for them to settle down, to maintain their identity (increasing in numbers) and to even pray for their enemies, to pray for the welfare of the state. It's not a call to all-out-rejection nor to assimilation, it's a call to live as though they're in their kingdom until their kingdom is actually restored. They are invited to live in their unique identity, to live in their restored kingdom until it is restored indeed. What gives purpose to this kind of life in Babylon is the promise that "I will gather you from all the nations and places where I have banished you... and will bring you back to the place from which I carried you into exile." Even though their kingdom, when it is restored, will be quite different from whatever they build in Babylon, everything they do in Babylon--building houses, increasing in number, praying for the state--is sort of a building block of restoration. Although the return from exile will be God's work and God's alone, they are bringing that work into the present as they live in Babylon... but not of Babylon.

In the same way, we are living in a sort of exile. The world is not as it should be. So we should not assimilate but we also should not revolt. We should build the Kingdom of God among us until it comes in fullness by God's hand. We should live out the kind of kingdom toward which we look, pray, and hope. We should pray for our enemies, love them, and do the work of restoration here and now. We are to declare God's reign in all the places where death claims victory and we are to mend the broken world as we look forward to a salvation within history, a renewal of all things. We are to, as Gandhi said (and God help us if this has become too cliche), "be the change we wish to see in the world." Since we believe that God's kingdom is indeed the reality God wants for the world, we are to do the work of restoration and reconciliation; bringing life where there is death. When Jesus said "the kingdom of God is at hand" he was proclaiming an historical soteriology, a salvation within history of this world. Thus we are not to abandon, escape, or reject this world. Instead, we are to embrace it, keeping clear our identity as the people of God, and look for its healing. This means that racial reconciliation, poverty relief, "economic stimulus," non-violence, compassion, humility, grace, honesty, love and even environmentalism are all part of salvation. The kind of salvation God wants to bring is not the replacement of this world with heaven, it's the healing of this world--the bringing of heaven here. As Rob Bell wrote, "The goal for Jesus isn’t to get into heaven. The goal is to get heaven here."

There is a term which appears in the Mishna, a two word phrase which encapsulates all of these ideas, a phrase which is sort of "hidden" throughout this blog (literally, it's in tiny letters in the top-left corner). It is Tikkun Olam (תיקון עולם) which essentially means "perfecting" or "repairing the world" or "repairing existence" or even "correcting reality." The term has become almost essential to Judaism and, if we get Jesus right, it's what Jesus was all about (even at the deepest corporate and individual spiritual levels). In the Mishna "in the phrase mip'nei tikkun ha-olam ('for the sake of tikkun of the world') to indicate that a practice should be followed not because it is required by Biblical law, but because it helps avoid social chaos" (Wikipedia... Gotta love it). What we do in the world is not about what God wants from us--"do this, don't do that"--it's about what he wants for us. Tikkun Olam is being in the world but not of it, it's declaring Christ's victory wherever it has not yet been embraced, it's about historical salvation, it's about justice and love, it's being what we hope for the world and living toward the reality which has been promised. "Repairing the world" is living in the kingdom.
Posted by wellis68 at 5/13/2010 10:38:00 AM