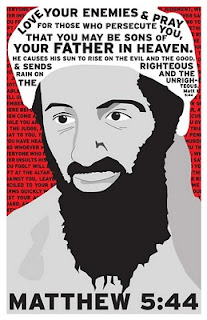 Perhaps the most strange but most essential aspect of Jesus is his love for his enemies. It's strange because it's counter-intuitive. It makes no sense when you boil it down to its' deepest level. Of course it makes sense if your enemy is still basically a "good person" (who just happens to bother you in particular). It's easy to recognize that you should love people who bother you personally, but it's a whole different thing to love someone who hurts others. It makes no sense to us, it is strange, to love someone like Hitler or Stalin or the rapist on the news. Shouldn't we hate them out of our sense of justice for the people they've hurt? Shouldn't we rejoice if they're put to death? Shouldn't we hate them together as a communal act of justice? But it's really not just the people who bother us whom Jesus is calling us to love, it's the Hitlers and rapists of the world. We're to love our enemies as well as our neighbor's enemies. This is strange.

But what makes this enemy love so essential is that, first of all, it is at the heart of the single most redemptive act in human history; the crucifixion of Jesus. The cross is the heart of the incarnation--God's with-us-ness--because the cross is God's act meeting us in our lowest and darkest places. And enemy love is at the heart of the cross, therefore enemy love permeates throughout Jesus' life, ministry, death, and resurrection and thus becomes a defining mark of the Kingdom of God. As Christ inaugurated the Kingdom on the cross, he prayed for the forgiveness even of those who were killing and mocking him. Jesus refused to bask in wrath but chose to forgive and to love the most unlovable.

Secondly, the essentiality of enemy love is in its' eschatological element. History has moved pretty consistently (with occasional interruptions which give us a foretaste of God's Kingdom) toward wrath, revenge, punishment, death and all that which is opposed to forgiveness. What's the greatest reason that war exists in the world? The fact that none of us are willing to forgive, we've always got to say, "they started it!" Jesus' teaching and act of enemy love is counter to this flow of history, it is the alternative to the pattern of the world and it's the only alternative which truly leads to the kind of eschaton for which God is working. Enemy love is like throwing a wrench into the gears of the system of violence and hatred. It's so counter-intuitive, so unexpected, so strange, so audaciously ridiculous that it's just what the world needs.

Indeed, in the same way that someone who's guided by fear and hatred might prepare themselves for hostility--perhaps by buying guns and barricading their home--we who are guided by enemy love and resurrection-hope might prepare ourselves for the worst, by training ourselves to love the worst. Perhaps, if we've trained ourselves to love, we might not be found unprepared when we're faced by the worst threats of violence... perhaps our love might throw a wrench in the gears in the same way that the resurrection did and history might be turned back upon itself.
Posted by wellis68 at 4/23/2010 05:38:00 PM