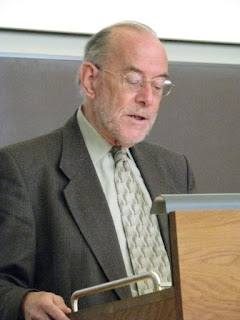 "In all this language of image and metaphor retains its tantalizing capacity both to indicate what is to be believed and to point to a reality beyond words. The reality being experiences and expressed, whether in terms of the kingdom of God, resurrection, the Spirit of God, or salvation itself, always escapes formal far less final definition. And yet the experience and the hope ever strive to express that reality afresh, drawing on tradition but ever finding it necessary to find fresh expression." James D.G. Dunn (New Testament Theology, page 96)

It's almost humorous how we sometimes dig in our heals and whiten our knuckles trying to cling to what really only amounts to particular language in expressing theology and interpretation. Sometimes our commitment turns out to be more toward the words themselves than to the God they are describing. The truth is, as we keep looking to the Scriptures, as we refresh our perspective and as we turn the pages as turning a gem in the light, revealing new and diverse colors with every turn, we discover, along with John Robinson, that "the Lord hath more truth and light yet to break forth from His holy word" (as quoted by Brian McLaren in A New Kind of Christianity, page 25). Robinson's quote continues,

"...the Lutherans cannot be drawn to go beyond what Luther saw. Whatever part of His will our God has revealed to Calvin, they will rather die than embrace it; and the Calvinists, you see, stick fast where they were left by that great man of God, who yet saw not all things. This is a misery much to be lamented. For though they were precious shining lights in their time, yet God has not revealed his whole will to them. And were they now living, they would be as ready and willing to embrace further light, as they had received."

However we take advantage of the wisdom of those who came before us, let us never take their wisdom as our folly. If our commitment is not to Christ but to, for example, a post-enlightenment/post-reformation understanding of "atonement" or "justification," even to the point where we are closed off to anyone who does not abide therein but may have much much more to offer, then we're guilty of a sort of idolatry. As Dunn says, "the reality being experienced and expressed... always escapes formal far less final definition." Our words about God and God's work in the world cannot be, and never will be, the final word on the subject. The words are there in order to ground us--"to indicate what is to be believed"--and yet also "to point to a reality beyond words."

So the greatest question is not so much whether or not what we believe is true, but whether or not our belief leaves us open to the right stuff. To what does our belief open us? Belief in the resurrection isn't important because it happened or because it's "true." Belief in the resurrection is important because it is the only belief which leaves us open to hope in what God is doing, it's the only belief that opens us to allow "what is mortal to be swallowed up by life" (2 Corinthians 5:4) so that "perfect love" might cast out fear (1 John 4:18). This is the true role of all doctrine--not to soak up our energy in defense of it but to open our hearts to the reality beyond the words.

The reality is not in the words, it's beyond them. So where is our allegiance? To the words themselves or to that of which they speak? Do our words leave us open to the light God is shining forth?
Posted by wellis68 at 4/22/2010 05:34:00 PM

Barbara Brown Taylor, in an essay in Christian Century (10/18/2003) suggests a distinction between "the Word on the [biblical] page" and the living Word, "the Word made flesh." She says, "If Jesus' own example is to be trusted, then following the Word of God may not always mean doing what is in the book." McLaren, as I recall, makes a similar point. I'm hoping to flesh this out some more in the next few days....

Yes! Good distinction. If I recall correctly, V.P. Furnish makes a similar point in his introductory chapter in "The Moral Teaching of Paul" (which I found to be extremely helpful, by the way).