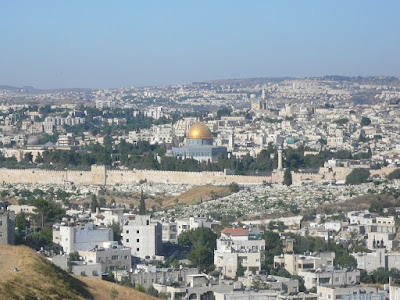 I recently engaged in a conversation with one of my new favorite bloggers, David Kenney, about what's sometimes referred to as the "Prevent the Messiah Legend." The legend suggests that Arab leaders in 810 walled up the Golden Gate--the gate through which the Messiah is supposed to come in both Jewish and Christian traditions--and began burying their dead in front of the gate (knowing that, due to priestly lineage, he would not be able to walk amongst the graves) in order to keep the Messiah out. I've always been hesitant to believe this story because I usually only hear it from Christians who are snarkily "bashing" Islam. I worry that this legend only perpetuated barriers between Muslims and Christians, preventing reconciliation and healthy dialogue. Some articles seem to present the case respectfully and with a level of credibility but it doesn't settle my discomfort.

There are, however, other explanations as to why Arab leaders blocked the wall in the first place and why they have an Islamic cemetery right in front of the Golden Gate. For example, my good friend and professor (well, he was my professor) Dr. Robert Mullins (Archaeologist, PhD from Hebrew University, and Biblical Studies Professor at Azusa Pacific University) provides this explanation:

"The Golden Gate is late Byzantine or Early Arabic in date. It was walled up in 810 AD by the Muslims as a way to restrict access to the Haram by unbelievers. But they also walled off the two Huldah Gates on the southern side of the Temple Mount as well, so it is clear that their motives had nothing to do with the prevent the Messiah legend. But the blockage of the Golden Gate gave rise to the “prevent the Messiah” legend nevertheless. This story was then combined with the passage in Ezek 44:1-3 about the closing of the outer gate of the sanctuary facing east with only the prince able to pass in and out, as well as the famous triumphal entry of Jesus in Luke 19:28ff. But in the latter case, if you read the text closely, there is nothing about Jesus entering the Temple Mount through the Golden Gate (or what would have then been the Shushan Gate). He could have just as easily entered through the southern Huldah Gates or one of the other entrances onto the Temple Mount.

Why would the Muslims want to keep the Messiah out anyway? Isn't their eschatology wrapped around messianic hope, just like the Christians' and the Jews'?
Posted by wellis68 at 4/12/2010 12:48:00 AM