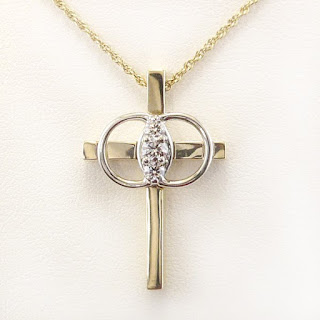 Too often the empty cross (you know... without the fellow on it) becomes just that... empty.

Now of course the cross's emptiness, in protestant circles, is supposed to remind us that "he's not there anymore" which is, I suppose, to emphasize the resurrection over the crucifixion without losing crucifixion altogether--a reasonable balance. But the very statement, "he's not there anymore" misses the point altogether about the reality of the cross.

The truth is, we're disgusted by the cross. We don't like worshiping a crucified Messiah because, to us, crucifixion is shameful. We don't like worshiping someone who suffers because we want to avoid suffering wherever and whenever possible--to protect ourselves and to preserve our excessive level of comfort. We want to get Jesus off of the cross as quickly as possible and remind everyone that Jesus is , in fact, sitting in heaven with God in luxury as though the cross never happened... exactly where we want to go, exactly what we want for ourselves.

Our atonement theories and eschatologies reflect this perspective. Substitutionary atonement suggests that Jesus died so we don't have to... now we can enjoy "blessings" and wait for him to return "in glory" and do what we think he should have done the first go 'round--kill all the infidels and bring the good guys back to heaven with him (i.e. rapture & tribulation). Jesus on the cross, however, scandalizes our whole perception. We want a Savior who'll fight and win and gain wealth, not one who gets tortured and rejected.

We don't allow the cross to change our understanding of what victory looks like, of what glory looks like, or of what true wealth really is. Rather, we force our theology of the cross to conform with our preconceived notion of glory and victory and power. We allow Jesus to go to the cross, as though we're reluctantly ok with it as long as he quickly gets back to doing what we really want him to do. We get him off the cross immediately not for true resurrection, where everything is changed by what happened on the cross, but so that we might go back to thinking the way we did before. Thus, our cross is empty.

But if we allowed the cross to change our perception of what victory is like and even of what God is like, our whole eschatological imagination (our hope for the future) would be transformed and out daily living would flow from the cross--from having been met by God in the darkest place. Jesus died on the cross, not so that he could get off of it and allow it to remain in shame, but to declare the cross as the throne of God--to proclaim, once and for all, that crucified people are not cursed but they are indeed the dwelling place of God. As one of my favorite Canadian bands, Downhere, put it in the form of a prayer, "You died upon it to redeem it" (from the song, Iliad).

Jesus on the cross is not a blasphemy; it's a revelation of who God is, what God's love does, what victory really looks like, and what we should hope to emulate. When I see the crucifix, the God of creation on a cross, I see myself and my calling. I see Jesus there saying, "as the father has sent me, so I am sending you." Having been met there in the lowest and darkest place--the place of shame and anguish--I see that if God will meet me there, then nothing can come against me. if God will meet me in darkness then I must never fear the shadows. Having been met by God on a cross, I have nothing more to fear. This makes me, and all of us who are shaped by the cross, very dangerous people. The powers of death cannot hold us and the coercion of fear is powerless against us. We are fully free to be a blessing even to those for whom we'd have to die to do so.

Everything--every ethic, every hope, and every dream--flows from Jesus on a cross. It's through the lens of the crucified God that we see our salvation. It's through the lens of the cross, and only through that lens, that we can ever really see resurrection and victory. "Where, O death, is your victory? Where, O death, is your sting" (1 Corinthians 15:55). And the truth is, He is still there! He's still there with all those who live in darkness and death. He still shines his light in the darkest and lowest places and he calls us to follow him. He calls to us from the cross, "take up your cross and follow me... for the light shines in the darkness and darkness cannot overcome it!"

"Iliad, tragedy, miseries all subtracted
A chosen one, I'm a Father's son
I'm the one You attracted

Come tomorrow, no one knows
But when everything unfolds
The hero wins

When the story of love
I believe it walk out
Never walk out
Story of truth" (Downhere, Iliad)

One Good Friday, I heard a Roman Catholic priest talk about the symbolism of the empty cross. Of course, most RC churches have a crucifix (with the body on it). But the Cistercians, he said, use an empty cross in their chapels. Their reasoning? Christ was crucified once on our behalf; now it is our turn to be crucified in his service.

Ooo! That's cool! I can definitely dig that symbolism. I don't have anything against an empty cross (indeed I am still quite protestant) I just think we sometimes miss the point. We should see Christ on the cross as a way of seeing the incarnation through the lens of crucifixion and we should also see ourselves there with him, just as the priest described, "now it is our turn."