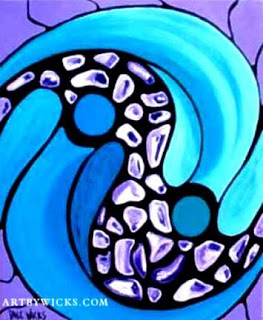 Thanks to a very good conversation I've had with Kay (in the comments on these three posts: 1,2,3) starting with the brief mention of penetheism in Andrew's post, I'm starting to become more open to the possibility that I may be a panentheist... of sorts.

If it is possible that God's wholly-otherness is compatible with panentheism, then perhaps it's not panentheism that I have a problem with. Perhaps I merely take issue with certain stands therein. Perhaps my own views that God, who is radically separate from creation, also soaks his creation and has chosen to radically open himself up to creation, are actually at least pseudo-penentheistic in themselves. The confusion then is in the label. Can panentheism be defined as simply as "all in God"? If this is so, and if I can reject some of the deeper implications not least the eschatological ones that could arise, then I can probably take the title (although I generally avoid titles and labels). But if panentheism is so simple, then who isn't a panentheist? I know many who would not hesitate to say that God can be experienced in creation and through relationships but would be very hesitant to embrace panentheism for themselves.

I agree about labeling, which is why I would rather see Panentheism as one of many models I reference, rather than a label I take on. Like the astronomers of old (and even presently), they would conceive a model of the universe that they felt would represent what was actually happening. In the same way, I think we bring our models to the table regarding God and make use of them as they are useful, knowing that some are better at explaining this and others that. Some become old and discarded or changed. However, we know that all are mere reflections and representations.

I guess I continue to use the label because I find it handy as a short (possibly) and sweet sign post towards what I believe in, compared to what I do not.

Ugh ... I meant to say "pointing towards" what I believe. Like a finger pointing at the moon. :) Dang typos.

I see that Kay, and I should probably clarify that I do refer myself as this or that because (as you say), it can be a quick point of reference. I just think they tend to fall short. I may be "liberal" overall, but there are many points of my worldview that some would declare conservative... so which am I? neither? both? who knows... often it depends on my mood... and almost guaranteed that a few months from now, I will feel differently. :)

But I am finding that I am happy to incorporate into myself much of what I am learning about Panentheism.

I agree with both of you about labels. Some labels may be more than just a label... for example, calling yourself a Christian or a Christ follower can be more of a declaration.