Some have suggested that the Emerging Church/Emergent Movement is really just "old liberalism" in disguise--like "wolves in sheep's clothing." For Example, John Frye wrote--in response to McLaren's new book, A New Kind of Christianity--"Brian McLaren offers old line Christian Liberalism dressed up in postmodern clothes, but it is still old Liberalism." Having connection myself with what Frye calls "old liberalism," I thought I should reply.

I’ve had my experiences in what you might call “old liberalism”--indeed, I my self am a member in the United Church of Christ--and there is a big difference in my mind between the Emergent movement and the old liberalism which is thriving amongst mainline churches. And although I tend to lean away from the most liberal aspects of my denomination, I appreciate them and thus I think we need to clarify some differences for both the Emergent Movement's and the main-line's sakes.

Primarily, their starting points are quite different. McLaren and others start from evangelical fundamentalism and react thereto while mainline liberals don’t often seem to feel much obligation to the evangelical tradition at all. Old liberalism generally starts from a position where openness and inclusion are essential doctrines (though they'd never call them that) and continues in that direction so that exclusivity is rarely part of the conversation (although that is changing... perhaps with Emergent influences... and some old liberals have and are calling for more disciplined theology).

I was at a UCC retreat just this weekend with some high school students and while I was there I was reading McLaren’s new book (which I think is great, by the way) and McLaren seemed refreshingly conservative after a day talking with my fellow UCCers. McLaren starts from Scripture and comes out. He takes the writings of folks like Paul to be authoritative and theologically trustworthy. Old liberalism doesn’t seem to have such an obligation. While scripture is beloved by the old liberals, it’s not always authoritative, never inerrant, and it’s rarely “infallible.” 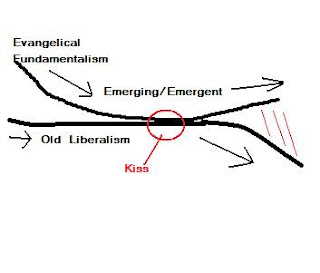 I’ve never found McLaren’s perspective, for example, to be threatening to the exclusivity of Christ… unless you quote him out of context. The openness of the Emergent movement always seems to flow from a lingering sense of the particularity of Christ. That sense does not always linger amongst old liberalism. Now, of course there are exceptions to this on both sides (sometimes Emergent thinkers seem to dismiss scripture more than others and old liberals seem to hold it in higher authority than others) but this is, as a rule, a general distinction between Emergents and Liberals.

If Emerging theology is still going to be thought of as "old liberalism," then it needs to be thought of as a distinct version thereof--one which has come to us through the evangelical fundamentalist tradition. Some could even argue it as a sort of reformed version of the liberalism we've known--one which calls both liberal and conservative extremes into reform. The Emergent Movement's language is unique and it's direction is different. Its' inclusion of other ideas starts and finishes with a profession of biblical authority and Christiological particularity, even if it sees scripture less literally than the fundamentalists do.
Posted by wellis68 at 3/23/2010 12:29:00 PM

You bring up a very important point IMO. The emerging church is not classic liberalism, nor is is classic progressive Christianity either.

What McLaren is doing in his latest book is beginning to lay out a new version of progressive Christian theology that incorporates some of the two theologies I mentioned.

Along with guys like Harvey Cox and his friend Philip Clayton the EC is trying to come up with--Liberalism 2.0--which is a postmodern form of progressive/liberalism they're calling "big tent" Christianity.

Frankly, I think they'll only succeed in further dividing professing Christians further. No matter where one personally stands, the theology of e.g. John MacArthur can never be reconciled with that of a Marcus Borg.

Ken,
I think you may be right. I think division is what naturally happens to the church when ideas are challenged (didn't this also happen in the reformation?) because of the centrality of ideas in Christian history. So it's quite important for all of us, no matter how we're being influenced, no matter what ideas by which we are being convinced, to do the hard work of collaboration at the local level. We need to unite, wherever we can, under the banner of Christ regardless of our differences. Through this, ideas can change as they must without destroying us.

I agree; a look at church history does show many periods of division, and e.g. later produced creeds many Christians adhere to.

As you say, Christians need to unite under the banner of Christ, so Who He is should be a central topic for sure.

One thing's certain, the next couple of years won't be boring.

I think I need to disagree with your ancestral chart. Certainly some voices in Emergence have come from Evangelical traditions and in many ways have reacted to the certitude and narrowness they have known. But lots of other Emergent voices have come from mainline traditions (or as you name them "old liberal" ones) who have reacted to the personal passivity experienced there. Most of the folks I cross paths with in emergent conversations are looking for something more than they have personally known, regardless of their past tradition. This is not to say that those traditions have not been deeply meaningful for others.

What gives me hope about the emergent conversation is: the acknowledgment of our epistemological limits, our need for holy grace, our desire to serve in more committed ways that make a difference in our lives and the lives of others >> love G-d, love others, regardless