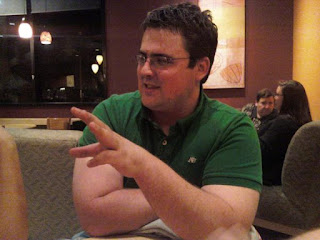 New blog in the blogosphere!

My good friend Jameson Gavin has just started authoring a blog at Forgodden Country and I thought it appropriate to give him a shout-out. Right now he's got a post on about Capitalism and Communism... not too political...

Jameson, or Jamo as I call him, tries not to position himself for or against either Capitalism or Communism but instead he points out that there are flaws to both systems. The true flaw factor, Jamo suggests, is not the system. The system can become a sort of scapegoat if that's all we ever think about. The true factor is us--human beings. We can bring justice or injustice in the system.

"...neither system is inherently evil... The truth is that if we want either of these systems to work, we have to become better people. Changing these systems starts on a personal level. We have to become conscious consumers. We have to be aware of the evil things companies do, and then shop at the ones that do as few of these as possible. Many times that means that we cannot shop at the cheapest place, but the trade-off means we are not hurting anyone." Read the post.

I think Jamo is right, at least in theory. We do have the power to manipulate Capitalism and people do have the power to manipulate Communism (although it's probably fewer people) in order to bring justice to the poor. But, in Capitalism, it takes an almost universal rejection of its’ implicit values (just think about the word, “capital-ism,” it’s the “ism” of money), or at least its’ temptations, until the values themselves do change.
Posted by wellis68 at 3/19/2010 11:45:00 AM