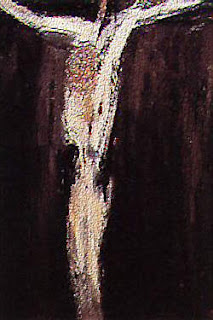 Sin is when we take something good and turn it in the wrong direction and redemption is when things are pointed in the right direction again.

Here in San Diego there is one story painting all the headlines. A young girl named Chelsea from Poway went missing not long ago, the response to which was a community-wide search. The search ended tragically with the discovery of her body. An arrest was made of a man named John Gardner, a registered sex-offender. About a year ago, a girl from Escondido named Amber went missing. Upon the arrest of Gardner in Chelsea's case, the search for Amber was renewed and finally reached tragic closure yesterday when her body was discovered. Gardner is now in custody and is facing serious charges which may, if not certainly, sentence him to capital punishment.

The other night as I sat and watched the news, I was overwhelmed by the ugliness of the situation. I felt sick to my stomach thinking about the tragedy of it all, the pain that the families must be feeling, and the hopelessness of it all. As I sat and thought, "what could we possibly do to turn this in the right direction? How can hope be brought to such hopelessness?" they began to interview people from the community and show their reactions. One woman said that she didn't think that Gardner should even be put on death row, "we should just kill him now." Another man said "he deserves to be treated the same way he treated those girls." Another woman even used the term, "an eye for an eye." On the garage door of Gardner's parents' home, vandalism was discovered. In red writing it read, "Chelsea's blood is on you." And when two young men went to paint over the vandalism, a fight almost broke out and they were rebuked by the neighbors. The overall reaction from the community was anger, vengeance, hatred, and contempt for Gardner and his family.

What Gardener did was so ugly, the situation is so hopelessly ugly, and people's reactions are yet so ugly as well. Can't there be some reaction that brings life and hope to the situation? Yet the vengeful and angry reactions of the community are still so hopeless and empty.

In the face of sin, injustice, and even the horror of something like rape and murder, we as followers of Christ have a strange opportunity, perhaps our greatest opportunity, to turn things back in the right direction. Jesus said, "You have heard that it was said, 'Eye for eye, and tooth for tooth.'... You have heard that it was said, 'Love your neighbor and hate your enemy.' But I tell you: Love your enemies and pray for those who persecute you..." (Matthew 5:38-48). In some way Jesus calls us to see the face of God even in the most horrific people, even in the face of John Gardner. God calls us to love that person, to pray for them. Such a loving response would be void of sanity if it was void of hope. Jesus, having been tortured, hanging on a cross of crucifixion, cries out "Father, forgive them..." (Luke 23:34). What kind of insane love would prompt such words of forgiveness in the face of such terrible injustice? Should they not pay for what they've done? What kind of hope could lead someone to love even when love seems impossible and irrational?

Jesus' response to horror and tragedy was the response of resurrection. Oh, what hope in such hopelessness! What forgiveness in the midst of vengeance! Jesus' response brought hope and restoration. What does our response bring?

Paul wrote, "Do not repay anyone evil for evil... Do not take revenge, my friends, but leave room for God's wrath" (Romans 12:17-19). Revenge is different from wrath. When we seek "an eye for an eye" and when we take vengeance and refuse to forgive, we stand in the way of God's wrath. Now, God's wrath is not like ours. Wrath, for God, never comes without restoration. God's justice always ends injustice. When we take wrath into our own hands, we simply perpetuate the hopelessness and horror of the situation. God's wrath is soaked in love and clothed in forgiveness but God does not turn his head to the situation, his forgiveness does not simply shrug off sin. On the contrary, God's forgiveness and his wrath are one. God's forgiveness is about offering the freedom of reconciliation, and there's work in reconciliation. There's hard, painful, and sometimes nearly torturous consequences to sin, these consequences must lead to redemption. God's heart breaks over the consequences which must be suffered in order to reach true restoration and in order for amends to be made. For us to leave this kind of wrath up to God, we have to get out of the way and we have to forgive. I'm not saying that we should do nothing, in fact we should respond to injustice swiftly but not without forgiveness and love. Therefore there is a role for the justice system and it is a good one. The role of the justice system should be to create space for God's wrath and to implement the kind of consequences which lead to restoration. These would likely be painful consequences for someone like John Gardner but (and it is nothing less than scandalous to say this) God will go with him. Gardner may very well reject God's presence, but God won't give up on him even if we'd want him to.

Many of us don't want to forgive. Some of us are not ready to forgive. But the only way to peace, the only way to true justice, and the only way for us to find freedom from our anger is through radical forgiveness and love. This is the only life-giving response. Rather than crying out "crucify him" or "kill him" we should pray for him, pray for his family, pray for the families of the girls he's killed and look with broken hearts toward the consequences he must now face. Ultimately we should pray for true redemption and that we might be a part of it. We must turn the situation back in the right direction. We need to see the face of Jesus even in the most morally bankrupt people and in the faces of the most wretched. Our capacity to love must exceed their capacity to destroy.

Most of all, we must pray for the families of Chelsea and Amber. We must pray that they find freedom, closure, and peace. Our hearts should break for their loss and for the pain that has been inflicted on them. Pray that God will be with them on this journey and that we, the church, might offer them healing wherever we are given the opportunity.

God of comfort and rest, fill us with hope in hopelessness and forgiveness where there is nothing but vengeance. Give our tired souls rest from our anger, frustration, and bitterness. May we be filled with the same love that caused you to speak words of forgiveness from a cross. Amen.