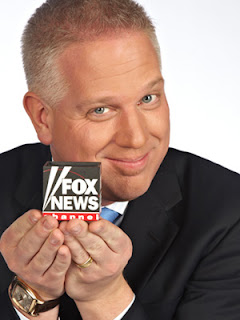 I'm sure that this will come as no surprise, but Glenn Beck is crazy. I'm giving him the benefit of the doubt by saying that he is crazy because if he is indeed sane, then he's just malicious and that would be worse. His recent statements are beyond political, they're actually theological (then again, what isn't theological?). He asks churchgoers to leave their churches if they find the word "social justice" or "economic justice" anywhere in their literature or on their websites. He says,

"I'm begging you, your right to religion and freedom to exercise religion and read all of the passages of the Bible as you want to read them and as your church wants to preach them . . . are going to come under the ropes in the next year. If it lasts that long it will be the next year. I beg you, look for the words 'social justice' or 'economic justice' on your church Web site. If you find it, run as fast as you can. Social justice and economic justice, they are code words. Now, am I advising people to leave their church? Yes!"

Now, I don't know what kind of churches he wants us to flee to, but any church that does not preach or work toward social justice or economic justice in one way or another is simply not fulfilling the Church's ecclesiological vocation. It doesn't matter what model your church follows, social justice is simply part of the gospel and it is built into the very word, "salvation." A church which leaves justice out of the story of salvation, leaves the humanity out of Jesus and perpetuates a disembodied gospel; the same kind of gospel which allowed genocide in Rwanda, torture in Chile, and many other historic injustices to persist including, in fact, the holocaust. If Jesus' words, "on earth as it is in heaven," don't have something to do with justice then I don't know how to make sense of them. If the proclamation of the church is simply about going to heaven when you die, saying a magic prayer, or perpetuating the status-quo then its' proclamation is simply not of the Gospel of Jesus Christ. I can't imagine how many pages of the Bible you'd have to tear out in order to really ignore the message of justice and salvation. Indeed issues of poverty and God's solidarity with the poor take up more ink in the bible than any other issue. Desmond Tutu once said,

"I don't preach a social gospel; I preach the Gospel, period. The gospel of our Lord Jesus Christ is concerned for the whole person. When people were hungry, Jesus didn't say, 'Now is that political or social?' He said, 'I feed you.' Because the good news to a hungry person is bread."

I trust Desmond Tutu's words over Glenn Beck's. Even if you marginally agree with Beck on occasion, don't join him in his brand of paranoia which looks for "code words" for communism even in the language of love.

Beck's comments have to be filtered through the fact that he himself is a Mormon. If one inclusivist enough to include Mormonism under the umbrella of Christianity, it would seem that one would also have to accept Beck, his insane (and decidedly non-biblical) views and all.

But if one allows some exclusivity to exist in Christianity, then in all probability, Mormonism will be seen as outside the Christian tent and Beck's views can be accepted for what they are: mean, nuts, anti-Christian...

I don't mind if he wants to call himself a Christian. Religious Christianity can be a big tent. But, even so, he remains "mean, nuts, anti-Christian..." and I can think of a few other Christians (who are not Mormons) who fit the same mold. I think that I have to claim Beck along with the Mormon church at least in some ways... if only because he appeals to the same Bible to which I appeal.

Beware of secular progressives, socialists and yes, of course, communists and nazis. All of these will lead you away from God!
Perhaps you were not taught the history of early 20th century communist Russia or fascist Germany, but today you can see the effects of socialist secularism in most European countries and the beginnings here in America. God is being removed from our lives like never before.
Glenn Beck is trying to warn you that if your church has been influenced by today's secularism to the degree that "social and economic justice" are deemed rights of all people then you should seek a church where these are righteous goals based upon one's need and satisfied through the charity, love, ministry and assistance of others, rather than mandated by law and "solved" through various programs with no need to thank God or anyone else for their help and no need to change their lifestyle because the government will give them everything they need EXCEPT humility, gratitude, encouragement and faith.
We are God's children, not Washington's. Glad to see you are not wearing political blinders and are involved!

We are indeed God's children and not Washington's! I am in total agreement with that. And this is precisely why "social and economic justice" are "rights" of all people. Social justice, in terms of the Kingdom of God, isn't about the creation of "systems" but the implementation of Christ's work on the cross. This makes social justice essential to the gospel. And it means calling out systemic injustices wherever they arise and calling our government to create avenues for justice and charity. Some would call this "favoring the poor" and I suppose that Beck would be against that... Jesus, however, not only favored the poor but shared his identity with them.

Thanks for the comment... it's not always about agreeing but learning to disagree well.