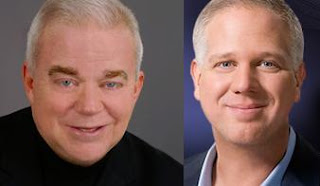 After Jim Wallis' invitation to engage civil dialogue, this response to Wallis from Glenn Beck just made me sad:

"So Jim, I just wanted to pass this on to you. In my time I will respond — my time, well, kind of like God’s time, might be a day, might be a week to you, I’m not sure. But I’m going to get to it in my time, not your time. So you go ahead and you continue to do your protest thing, and that’s great. I love it. But just know — the hammer is coming, because little do you know, for eight weeks, we’ve been compiling information on you, your cute little organization, and all the other cute little people that are with you. And when the hammer comes, it’s going to be hammering hard and all through the night, over and over…"

What a terribly aggressive and threatening response. I'm sure it will amount to nothing. Beck has already made it abundantly clear that he's against stuff... lots of stuff... so it's just white noise for him to say anything negative about anything, especially someone like Jim Wallis. Wallis has always been passionate about justice and about the poor. He's also always been about finding real dialogue rather than getting caught up in partisan politics and mud-slinging. He happens to be one of my favorite authors and, in my opinion, he's one of the most level headed political thinkers in America... quite a contrast to Beck. I'm sure that most of what Beck could say, and will try to say, about Wallis and Sojourners, he could also say about Shane Claiborne, Martin Luther King Jr., Gandhi or anyone who works toward social justice for that matter. God knows, Beck would have lots of bad things to say about me too. But even though Beck may frustrate us and even make us angry, the best response is love--always has been. I pray that Beck will choose to engage in a constructive dialogue. Wouldn't that be more helpful than "hammering"? Read the Sojourners article.
Posted by wellis68 at 3/15/2010 06:55:00 PM

I keep wondering... how much more psycho does Glenn have to behave before the Christian Right will... consider him psycho?

Andrew,
I'm with you... I sometimes forget that people really take him seriously. But they do and I have to honor that.
-Wes

Good point Wes, thanks... I need to honor even if disagreeing, and psycho is a strong word. I retract that. I shall restate it as, I fear there seems to be nothing Glenn can say that will be deemed inappropriate by some Christians. :)