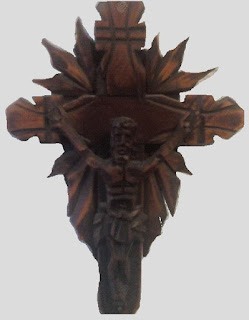 In our Christian political thinking we tend to take one of two approaches; either escapism or assimilation.

By escapism I mean the tendency to interpret Christ's teachings and God's hopes for the world as "too idealistic," irrelevant for daily decision-making, and even ahistorical (meaning that it happens outside of history and that God's Kingdom is not "here among us," as Christ suggested, but up in the clouds somewhere). This correlates to a sort of early gnostic interpretation of Christ's identity or even a Docetic view in which divinity is held to be too holy for true incarnation and Jesus could not have been human and must have only seemed human. Similarly, we tend to dehumanize the teachings and the eschatological work of Jesus by consciously or subconsciously believing that Jesus' work only seemed like it was viable within history. Thus, politically, we render it senseless and impractical to imagine and to work towards a world in which there are, for example, no more wars and no more hungry people. We think it silly to even suggest that that's what Jesus was hoping for because surely his work was heavenly and thus couldn't be history. And so we move on through life, either uninformed or misinformed by Christ's gospel, left to make our decisions on the world's terms until Jesus "comes to take us home."

Assimilation, on the other hand, is when we think just the opposite. It's when we deny that Christ's intentions were anything other than historical and for-this-world. This is more like the early heresy of Arianism in which Christ is understood as temporal, only human, and not divine. Similarly we sometimes go about life as though Christ's work is not eternal as in "from outside"--"it worked then, but these are different times." We assume that there is no eternity to the matter when it comes to God's Kingdom or that we have no effect on eternity. And so why should we be informed by any eternal perspective? Why embrace some "otherworldly" alternative perspective when there are fine ideas working right now all around us (at least we convince ourselves of such). This is reminiscent of to groups; the Sadducees and the zealots of Jesus' time, two opposite perspectives carrying similar traits.

Zealots couldn't conceive any of Jesus' ideas because they'd bought into the ideologies of the day. They expected Jesus to start a violent revolution within history because they couldn't make sense of any of Jesus' "love your enemies" talk. They only embraced Jesus' teachings when they conveniently intersected with their preconceived notions of how the "Kingdom of God" would come about. For them, any eternal perspective of love and peace, any alternative to what they understood as the dominant options in their culture, seemed irrelevant.

Sadducees were opposite the zealots insofar as where the zealots wanted to kill Romans, Sadducees wanted to get along with them, after all you could make more money that way. But, like the zealots, they had bought into certain ideologies of the time so much so that they were incapable of accepting Jesus. The Sadducees had lost any inkling of hope beyond what was in front of them. "Go along to get along" could have been their motto. So for them, acceptance of the status quo and perpetuation thereof was the only reasonable political option. When Jesus presented an alternative and eschatological option, they had to shut him up. They only liked Jesus when he (and rarely did he) intersected with their preconceived notions. Jesus was threatening the status quo and their prosperity therein.

Like the zealots and the Sadducees of Jesus' time, we try our darnedest to assimilate Jesus into the popular options of our day and we kill any part of him which does not intersect. And we ourselves embrace and assimilate to the popular options of our day; either violent revolution or calm acceptance of the status quo--either Democrat or Republican. we try to interpret Jesus and conform him in light of those options so that in the moment of trial we expect either violence or acceptance and we would be surprised to find our Jesus on a cross. And so we move on through life uninformed by the gospel because it sounds too foreign to us. By assimilating Jesus, not only is the gospel historical but it remains too historical for us to imagine anything other than what's in front of us.

There is a third option. This is true incarnation, where Christ is fully man and fully God and where his teachings, his work, and his hope are fully historical and fully eternal, making Christ's option for the world un-assimilated to the popular perspectives and yet viably correlated to the call and responsibility of the historical people of God. As Jose Miguez Bonino puts it,


"...the Incarnation becomes the clue for understanding all of God's dealings with human history and with the whole of world reality. it speaks, on the one hand, of God's 'free affirmation of man, his free concern for him, his free substitution for him,' as Barth expresses it. On the other hand, it commits Christians... to 'belief in the ultimate significance of the historical process." (Toward a Christian Political Ethics page 80)

It is by the incarnation that Christ's heavenly dream meet Christ's work in human history, eternally binding the two together. By this, Christ's teachings, his work, and his hopes become not merely a heavenly standard or futuristic disembodied ideal, rather they become an invitation to participate in the praxis of Jesus as a way of approaching the world of political realities and tragedies. Jesus does not escape into a heavenly body, bidding us to follow there. Jesus does not assimilate to the popular options. Instead, he brings heaven into history and offers a revolutionary alternative, familiar to us but yet unimagined. The incarnation teaches us to affirm God in humanity and to act accordingly in response to the realities of poverty, war, racism, domineering governmental systems, and every other ethical choice which, within history, remain political. Incarnation is the basis of Christian ethical reasoning. To quote Miguez Bonino one more time,


"If God is not present in the death of Christ--and on this the whole Christian faith stands or falls--he is not present as transcendent Power overruling human injustice and oppression from outside, but as Jesus' own power of truth and love operating 'from within' to surrender his life 'for the many.' ...The resurrection comes not to cancel out the cross... but rather to confirm Jesus' praxis of love and justice and thus to invite a participation in that praxis, in the sure hope that such praxis is not lost but always recovered and incorporated in the future of the kingdom.... Confident following is the correlate of the Cross." (Christian Political Ethics page 114-115)