Christmas and The Whore 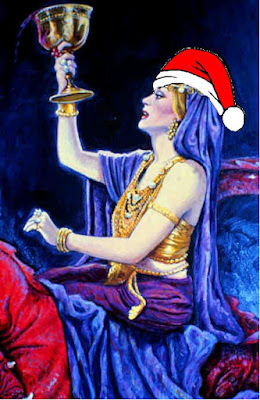 Christmas time is possibly the most wonderful time to think about "the great whore." Revelation 18 is a timely passage in light of bargains, the rush of present buying, and the mad mall shopping which have, unfortunately, made their home in typical American Christmas celebration... even, if not especially, among Christians.

The great message of Revelation 18 is widely ignored because it is widely misunderstood. We are trained, when we read Revelation, to search for complex futuristic and eschatological interpretations. We take the text to be complex but we make it complex in a much different way than it truly is. The complexity of Revelation is not found in the systematized dispensationalist charts and maps of "end times" events. Rather, it is only complex in it's literary genre (only because we have no real modern example of apocalyptic literature to which we could compare it) and in its historical particularity. If you have no idea about apocalyptic literature and no idea about the historical allusions being made therein, then you are on the fast track to ignorance when it comes to Revelation. This kind of ignorance has produced the common interpretation of Revelation 18; a prediction of a future eschatological figure which will deceive the church and help out the "Antichrist."

But Apocalyptic literature rarely asks us to peer into the future so as to find new characters and "end times" events. Rather, Apocalyptic literature more often asks us to look into the present and to identify current events in light of their eschatological significance which may be highlighten by future triumphs and/or judgements. To understand Revelation you have to be able to at least vaguely identify events current to the late 1st Century. Only once we've identified the author's current events can we step to our own and begin to identify them in light of Revelation's lens. Revelation 18 is a good example of this.

Revelation 18 begins, in typical apocalyptic form, with an angel, that is a heavenly being with implied Revelatory knowledge. This angel pronounces the fall of Babylon which is, at this point, certainly a symbolic figure symbolizing something more current than Babylon (since Babylon hardly existed in the 1st Century). So the question is, what is the author identifying?

So far there's nothing in the way of identification other than that Babylon has become a home to all kinds of hidden evils.

"For all the nations have drunk
the maddening wine of her adulteries.
The kings of the earth committed adultery with her,
and the merchants of the earth grew rich from her excessive luxuries."

She offers herself adulterously to whomever can take her, she offers power to kings and wealth to any merchant willing to share in her luxuries. Now, although there's room for other interpretations (since apocalyptic literature is comparable to parables in this way) there is an obvious symbolism here. What on earth can make those with power more powerful and can make merchants wealthy at the same time? What other than an economic system? Now remember that we're not peering into the future but into the authors current situation. The Roman economic system had become a place for the wealthy to keep on getting wealthier and for the poor to keep on getting poorer. There were no limits to how wealthy someone could get if they played the system correctly (besides the limits of scarcity) and there was no limit to how poor someone could get if they did not fit the system. Christians, i.e. "the saints," did not fit the system. Thus the association between the poor and the church was not merely a theological association as it is at best in typical American suburban contexts, it was a very literal association. Christians were overwhelmingly poor. The few wealthy Christians in the world at the time were defiantly exceptions to the rule and their presence is not even notable in the author's context (Paul and others mention wealthy Christians but this author does not).

Christians and the poor had no access to power nor to wealth nor to anything else which the economic system offered. They would have to abandon their faith, abandon their brothers and sisters, and to commit adultery with the whore of Babylon just to have a chance at those things. It was indeed the economic system, playing off of the false power of death, which empowered the kings to oppress with sword in the name of peace and the merchants to oppress with excess in the name of prosperity.

Is the economic system is our context much different? Not really. The rich get richer (even in a recession) and the poor get poorer. Meanwhile, many of those in power play off of people's fear and secure their own power by way of economics. It's the very economic system into which we consume and buy presents and celebrate "Christmas" (isn't that ironic). Our consumption, whenever we play the system for our own gain and when we look toward excess, is a curse to the poor laborers who work for $.17 a day. This is the whore of Babylon in our context.

And what is the angel's solution? A violent revolution? No. Martyrdom? Not in this case. The call is simple.

The voice simply says "come out of her..." What a request! No call to fight, no call to active resistance except for the action necessary to cease from partaking in the whore's power and luxuries. How much farther would the whore make it if we were to just "come out" and find creative ways of gift giving in God's economy? Not very far at all. This is how the whore is "conquered." We could learn from this, especially during Christmas, to bless the poor with our consumption and to find God's economy in the midst of this convoluted season.

No kings can rule over a paople who have no fear and no merchants will sell to a people who share with and take care of one another. And yet simultaneously it says, "Rejoice over her, O heaven! Rejoice, saints and apostles and prophets! God has judged her for the way she treated you."

The merchants and kings will mourn but the poor martyred saints will rejoice. What would happen if the economy tanked (I mean worse than it is right now)? Will we have found creative ways of sharing and taking care of each other outside the system? Would the Amish be too concerned? Would we find ourselves rejoicing with the saints or mourning with the merchants? Are we on the side of the poor or the wealthy?

Who rejoices and who mourns when we consume? Do the wealthy C.E.O.'s of Walmart and Nike rejoice during Christmas at our celebration? Do the poor workers mourn? Or do the poor rejoice at our sharing economically with them? Do we buy from them (Think, for example, of fair trade) or do we oppress them as we buy from the wealthy? This Christmas let us find ourselves rejoicing in God's economy with the poor to whom a savior is born; offering our gold, frankincense, and myrrh to a refugee child born in a manger.
Posted by wellis68 at 12/23/2009 11:43:00 AM

I think you are on the right track, but to compare today to Roman times is extremely ecessive.

Even minimum wage workers on food stamps in America can eat enough to survive and have shelter and some access to health care. I doubt the poor could say that in Roman times.

And if you are correctly referring to the idea that under Roman law, one could be stripped of the right to earn money and lose possessions by virtue of his or her beliefs, that's a far cry from today.

So I agree that the book is about the first century and not predicting future events, just don't take it too far.

pf,
I think you have to look at it in terms of global economy and not just American economy. The minimum wage worker in America takes advantage of those in extreme poverty in places like Honduras and Guatemala whenever they shop at Walmart. I believe the function of apocalyptic literature is, in part, to offer us a lens through which to interpret our reality, i.e. economics, etc. That's all I'm trying to do.

And I never meant to say whether or not "beliefs" have anything to do with it. That's a more specific conversation than what I'm doing here.