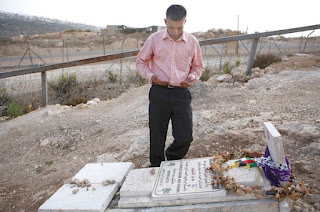 "Nonviolence is our most powerful weapon. If they cannot accuse us of terrorism, they cannot stop us. The world will support us."_Mohammed Khatib


"Khatib, 35, is a modern-day Gandhi in a culture that enshrines the language of the gun, even if most Palestinians have never used one. And the risks of his activism are enormous."

"In a long conversation, he spoke in rapid-fire sentences about his role models -- Mohandas Gandhi, Martin Luther King Jr. and Nelson Mandela -- while taking cellphone calls about the next move in a legal challenge to the barrier. He believes Israel is trying to crush nonviolent activists because it would rather take on an armed insurgency."

"It was 2001. Khatib watched in horror as Israeli soldiers shot an unarmed friend at a checkpoint. Two weeks later, the militant Al Aqsa Martyrs Brigade made a revenge attack on the checkpoint, killing seven soldiers.'My first reaction was 'Good for Al Aqsa!' ' Khatib said. Then he realized the dead soldiers belonged to a different unit, not the one on duty when his friend was shot. 'It made me wonder: This cycle of death, of violent action and reaction, how we can break it?' "

"He made sure protesters carried video cameras to document the army's use of tear gas and rubber-coated bullets to keep them away. And he worked to enforce zero-tolerance of violence by the activists..." Read the LA Times Article.
Posted by wellis68 at 11/05/2009 06:33:00 PM