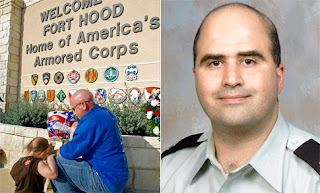 Hear these words from a military veteran in response to the shooting at Fort Hood:


"...as Christians, we know violence is not part of God’s intent and that in every form it counteracts Christ’s redemptive suffering on the Cross. It is with that knowledge we must also pray for the shooter himself.... As the facts continue to be revealed in this tragedy, Major Hasan will most definitely be the focus of an entire nation’s rage. Without a doubt, he will suffer the unforgiving wrath of public opinion. As the Church, I hope we can find it in ourselves to encourage our neighbors and friends to remember his humanity, however tarnished it has become, and extend to him what compassion we can muster. If we succumb to the temptation to hold malice and rage towards Major Hasan, we will, as John Howard Yoder might put it, become just another sociological reflection of the world and embody the message that there is truly nothing new about Christ. We have a beautiful opportunity, as Christ’s body, to show the world that hatred and scorn, and ultimately violence, does not have to have the last word."