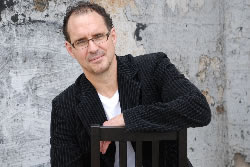 Greg Boyd, who I had the pleasure of meeting a couple of years ago (at an Open Theism forum at APU), recently wrote this critique of the painting called "One Nation Under God" (which I cannot post directly due to copyright stuff). The painting pretty much makes me want to puke due to the overwhelming amount of conservative American bias in almost every brushstroke. At the same time, it's almost laughably ironic because of the inclusion of such folks as Fredrick Douglas, who criticized white American Christianity for having nothing to do with the Jesus of the Bible, and Thomas Jefferson, author of the Jefferson Bible which extracted Jesus' "moral teachings" from the gospels of the Biblical canon while deleting and editing out the "artificial vestments" including miracles of Jesus.

Boyd is right to criticize this painting for being idolatrous. It replaces the Jesus of the Bible--who showed no favoritism for any one nation but sought the restoration of the whole world, every nation, and sought to rebuild the Temple of God in his resurrection to be a house of prayer for ALL NATIONS--for a pseudo-Jesus who celebrates America over against all other nations.

"The bottom line is that someday, people from every tribe and every nation will gather around Jesus (Rev. 7:9-10) and I assure you he won’t be holding a particular nation’s Constitution! The chief business of the church is to model this beautiful unity-amidst-diversity in the present. We are to manifest a Kingdom in which there is no male or female, Jew or Greek, rich or poor, American or British, and in which there is no violence."

With our lives may we paint a Jesus who holds no flag or Constitution of any one country but who builds in us a house of prayer for all nations. May we be consumed by the eschatological imagination of the real Jesus and not by that of Americanism.

P.S.
I don't see how inerrantist conservative Christians can take this imagery seriously when the artist claims that the Constitution is Divinely inspired. I thought that only the Bible was divinely inspired.