"So when you see standing in the holy place 'the abomination that causes desolation,' spoken of through the prophet Daniel—let the reader understand— then let those who are in Judea flee to the mountains. Let no one on the roof of his house go down to take anything out of the house. Let no one in the field go back to get his cloak. How dreadful it will be in those days for pregnant women and nursing mothers! Pray that your flight will not take place in winter or on the Sabbath. For then there will be great distress, unequaled from the beginning of the world until now—and never to be equaled again. If those days had not been cut short, no one would survive, but for the sake of the elect those days will be shortened. At that time if anyone says to you, 'Look, here is the Christ!' or, 'There he is!' do not believe it. For false Christs and false prophets will appear and perform great signs and miracles to deceive even the elect—if that were possible. See, I have told you ahead of time. So if anyone tells you, 'There he is, out in the desert,' do not go out; or, 'Here he is, in the inner rooms,' do not believe it. For as lightning that comes from the east is visible even in the west, so will be the coming of the Son of Man. Wherever there is a carcass, there the vultures will gather." _Matthew 24: 15-28

These 13 verses are probably the most problematic verses in this chapter. It almost certainly requires a first century lens to understand them. When Jesus uses the term "abomination that causes desolation" he is indeed quoting the book of Daniel (an earlier apocalyptic text) but assuming Jesus listeners knew how to read apocalyptic literature the way the scholars tell us it should be read, they would have thought of much more. The book and stories of Daniel, as an apocalyptic text, would have been passed from generation to generation in order to offer its readers a lens through which to see and to interpret their own experiences. It would have offered to them a language for the oppression they witnessed and the systems in which they lived. Originally, the text of Daniel 9:27 and the term "abomination that causes desolation" referred to the actions of Antiochus IV in 167 BCE (1 Macc 1:54), when he erected pagan idols in the Holy Place, which provoked the Maccabean revolt. But as the text was passed on, there's no doubt that all sorts of other images, anything that threatened the purity of Jewish worship and identity, woud have been associated with the "abomination that causes desolation." Imagine what images would have raced through the mind of a first century Jewish disciple. Would not have images of oppression and persecution come to mind? Would not a myriad of foreign rulers and oppressors have been remembered? Perhaps one might have thought of the Roman preatorium which was built directly next to the Jewish Temple in Jerusalem so that the Romans could regulate the happening in the Temple. All sorts of memories, not just Antiochus IV and the Maccabean revolt would have come to mind, and Jesus meant for those memories to be part of his apocalyptic discourse.

Now put yourself in the shoes of one of Matthew's original readers. Remember that the text was written not just to recount history but also to address the specific issues of the original reader. Its words would not just have been for Jesus' contemporaries but also for the people to whom the author of Matthew was writing (in fact, in this particular passage, we even have an interpolation to let us know that this passage is for the reader: "—let the reader understand—").
What images might have been conjured by the reading of the term "abomination that causes desolation"? The year is roughly 80AD. The destruction of the temple and the Jewish revolt is still fresh in your memory. 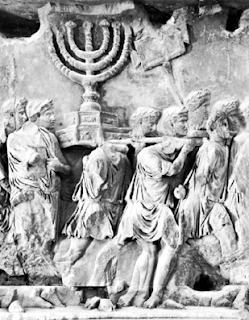 You have witnessed armies surrounding the holy place, you have seen the Temple of Yahweh laid down in ruins. Does it get any worse than that when it comes to tainting Jewish worship?

For the original readers Jesus words must have pertained to the destruction of the Temple and the events of AD 66-70, the "abomination that causes desolation" must have pertained to Roman invasion and Roman armies (see Luke 21:10). The horrors of those events are described here in Matthew 24: "For then there will be great distress, unequaled from the beginning of the world until now—and never to be equaled again." But that's not where it ends. The story of salvation the story of Jesus' return doesn't end with destruction. "At that time if anyone says to you, 'Look, here is the Christ!' or, 'There he is!' do not believe it. For false Christs and false prophets will appear and perform great signs and miracles to deceive even the elect—if that were possible."

What questions must have been on the minds of Matthew's readers? Surely they would have wondered if the events of the Jewish revolt were part of Jesus' return. Perhaps they wondered if they'd missed out on the parousia altogether. Jesus reminds them that his coming will not be something they could miss, "For as lightning that comes from the east is visible even in the west, so will be the coming of the Son of Man." Perhaps they wondered if they should have stayed and fought in the revolt, if perhaps a revolt was part of Jesus' return just as a revolt was prompted by the first "abomination that causes desolation" (the Maccabean revolt). But Jesus said, " let those who are in Judea flee to the mountains." Revolt wasn't part of Jesus' plan. Fighting back wasn't his intention. Jesus' coming and thus true restoration will happen with or without people fighting wars in the name of Yahweh.

The point (or at least a point) is that this is not how Jesus is returning--not in revolt, not in the chaotic destruction of the Temple, and not in any of the events to which we today may be able to apply apocalyptic images such as "abomination that causes desolation." Jesus' return will be quite different than you'd expect, quite different from how things have worked in the distant and recent past. Jesus' return is like lightning, visible from everywhere, unmistakable.

So whatever it is you're looking for to be the "abomination that causes desolation," whether it be in the destruction of the Temple or in some future event, though it's alright to be on the look out for figures and events to which we might be able to apply such apocalyptic imagery, know that Jesus "told you ahead of time" not to believe those who say, "look there he is." For Christ's coming will be quite different from how you might expect. Perhaps it will be in glorious renewal rather than in horrific desolation.