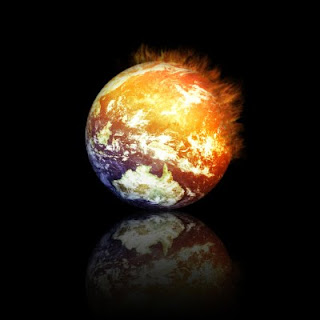 Jesus left the temple and was walking away when his disciples came up to him to call his attention to its buildings. "Do you see all these things?" he asked. "I tell you the truth, not one stone here will be left on another; every one will be thrown down."As Jesus was sitting on the Mount of Olives, the disciples came to him privately. "Tell us," they said, "when will this happen, and what will be the sign of your coming and of the end of the age?" Jesus answered: "Watch out that no one deceives you. For many will come in my name, claiming, 'I am the Christ,' and will deceive many. You will hear of wars and rumors of wars, but see to it that you are not alarmed. Such things must happen, but the end is still to come. Nation will rise against nation, and kingdom against kingdom. There will be famines and earthquakes in various places. All these are the beginning of birth pains." _Matthew 24:1-8

I feel like I should probably consult the commentaries before writing a post like this but let me just offer my sense of what's going on in Matthew 24. Whereas we are often taught to interpret these passages as sort of mapping out for us what we should look for as "signs of the end times" and such, I don't think that's what's really going on in these passages at all.

Jesus is telling his disciples not to get caught up in the hype of waiting for "the Christ" and not to get deceived into putting their trust in any of the many who might come along claiming to offer salvation, claiming to offer freedom, claiming to be for them what Jesus is and has been for them. Jesus sees in his disciples the potential impatience that might come if their biggest and most distracting question is "when's it comin'?" If we're looking around every corner for "the Christ," if we fall into cynicism, falling into the lie that the kingdom of God is somehow less than what Christ offered (i.e. Matthew 11:5), and if we put our trust in anything less than Christ we will find ourselves among the many who are deceived. These other "Christs" will deceive many, Jesus says, and we only need to look around us to see that this is true.

We only need to look at the Americanism that surrounds us--the trust that so many around us have placed in their country, their economy, their wealth, their own country's military might, and their personal sense of who's "in" and who's "out"--to see that so many have been "deceived" and are missing out on Christ's call to radical self sacrifice and enemy love. This is not some sign of the end times for it was not untrue for the disciples either. They could easily look around them and see people offering themselves, their allegiance, and their trust to Caesar or to Herod. Caesar saw himself as ushering in the peace of Rome, a time of prosperity. Caesar offered himself as a savior with the might of his sword which was quite different from how Jesus offered himself. Many people around the disciples were devoting themselves to Caesar and were trusting them as their Christ. Herod too saw himself as a savior, as the king of the Jews, and as the Son of God. Jesus warns his disciples not to settle, out of impatience or cynicism, for any system or leader who claims to offer freedom, salvation, or liberty which are precisely the things that only Christ offers and offers freely.

Jesus then refers to a pattern with which the disciples again would have been familiar--"wars and rumors of wars." As the empire was busy expanding itself, conquering nation after nation through military conquest, it makes sense that the disciples would have known "wars and rumors of wars." Their entire history, in fact, was filled with wars and rumors of wars. Ever since the curse of Genesis 3, the chaos of nation rising against nation, famines (I'm sure the disciples knew about those), and earthquakes has been reality. This pattern of chaos threatens over and over again to claim creation (through the flood), to claim Israel and God's covenant (through slavery in Egypt), and to claim that death is the true end of the world (through killing Jesus on the cross) but God continually disrupts the pattern with creative peacemaking (with an ark, a speech impaired herdsman raised by Egyptians, and with glorious resurrection) showing us that just as you're about to close the book, resurrection is just around the corner. When it seems hopeless and when it seems that the end has come, Jesus says "such things must happen, but the end is still to come" as if to say "this isn't how it ends, death doesn't win, this is just the beginning. Resurrection is around the corner, don't give up!"

Birth pains, thank God, is not where the story of life ends... it's just where it begins. Though we might be tempted to give up, there is precious life yet to come... the best is yet to come. It's as if to say, "don't lose hope, press through the suffering, take up the cross, keep living the call of the Kingdom of God and move toward new life... it's just around the corner."

So let's not get caught up in the hype of looking around every corner for Jesus' return and for signs thereof. Let's not give in to the temptation of thinking that wars and rumors of wars are the end, that they're the inevitable path to destruction, that the patterns of chaos should divert us from the path of the Kingdom of God when in fact we should not be alarmed at these things, we should not think that they're really the way it's got to be, we should continue to work for the best that's yet to come and for a world beyond wars and rumors of wars and for life beyond the birth pains.